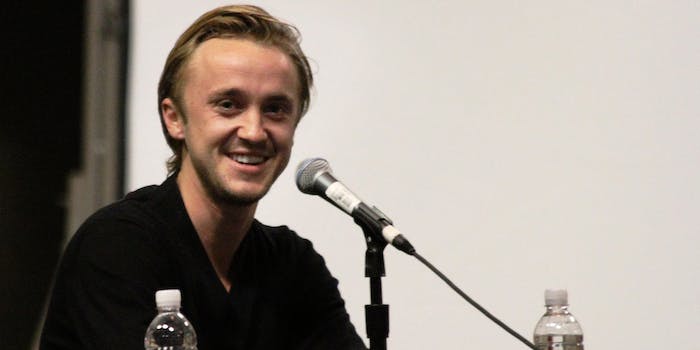 This time, the fans are bringing the magic.

Draco Malfoy may have mellowed out in his old age, but his real-life counterpart, Tom Felton, has always been in love with us Muggles.

Felton is so enamored with Harry Potter fans that in April he’ll be debuting a documentary on the BBC devoted to exploring the fandom, along with hardcore fans of other franchises as well.

As part of the documentary, Felton will be interviewing his old friends Daniel Radcliffe and Rupert Grint, along with the queen herself, JK Rowling.

In an interview with JustJared, Felton described the documentary as “an hour-long…in depth look at the world of super fans and these people that have followed franchises.” Described as “a road trip journey” with Felton as the narrator, the documentary profiles passionate fans and activities like collecting and cosplay.

Felton said the experience was something of an eye-opener for him. Most of us are eager to go behind the scenes of celebrities’ lives, but what fascinated Felton was seeing the great lengths to which ordinary fans went to meet people like him:

It was a massive insight for me, going behind the ropes and seeing what people actually do to stand behind a railing at an event. You don’t really think about the three hours it took them to stand there and get the best spot.

After the film airs on the BBC, it will be released online for fans everywhere to enjoy.

We have mixed feelings about this. We have a severe allergic reaction to the term “super fan,” which we view as a meaningless marketing term that promotes a hierarchy of fandom that doesn’t actually exist. It pains us to see our old friend Tom buying into the myth that there’s something extra-special about fans with more resources than other fans who might love their fandom just as much. (Resist, Tom! There’s still time!)

And we’re sadly all too familiar with documentaries like this being used as a way to subtly gawk at the fans they profile. They tend to serve as a way for “normal” people (i.e. people not in fandom or a similar subculture) to glimpse an extreme version of what fandom is about. This usually only leads to misunderstanding, mockery, and fans feeling rebuffed and mischaracterized by the media.

On the other hand, if anyone could respectfully represent fandom to outsiders, it would be Felton, whose Pottermore sorting recently confirmed that he’s the polar opposite of his snobby on-screen alter-ego. The Harry Potter cast has always stayed close to their fans, with several of the actors, including Felton, doing convention appearances and even singing in Wizard Rock bands.

Felton isn’t the only cast member interested in studying fandom. Chris Rankin, who plays Percy Weasley in the series, actually wrote his graduate dissertation on the Harry Potter fandom. The paper attempted to answer the question, “Will the Harry Potter fan community survive once the saga ends?”