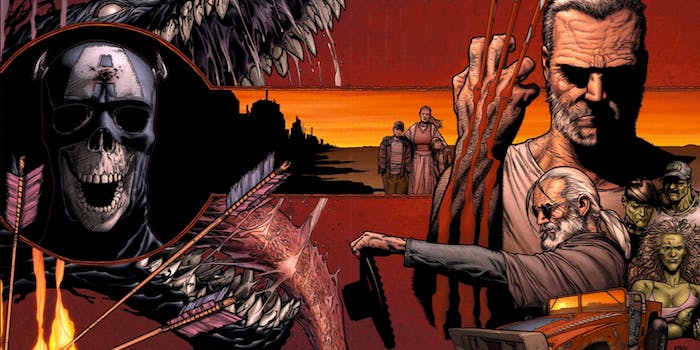 20th Century Fox can't make a straight adaptation, but it's not impossible.

Will Wolverine’s final splash on the big screen show us a completely new side of the beloved superhero?

If rumors about the untitled third standalone Wolverine film are to be believed, that’s a resounding yes. Den of Geek reported earlier this year via unnamed sources that The Wolverine 3 will be an R-rated film based on the celebrated “Old Man Logan” comics storyline, an eight-issue arc running from June 2008 to September 2009 by Mark Millar and Steve McNiven.

For fans who’ve been paying attention to Wolverine news, the report was less news and more of another hint at what they already figured out. For one, Hugh Jackman basically admitted as much last year at San Diego Comic-Con. While he confirmed an X-Men: Apocalypse cameo and that The Wolverine 3 would be the last time he’s playing Wolverine, he did offer the tiniest of teases for the movie.

A couple weeks later, Jackman posted a photo of himself with one of Wolverine’s claws protracted—made to look like the middle finger—and asked his fans what they’d like to see in The Wolverine 3, using the hashtag #OneLastTime.

My last time putting on the claws. What do you want to see happen? 50 words or less. I'll read as many as I can. pic.twitter.com/ksA1Gii5tf

Many wanted to see Wolverine finally don the classic yellow suit the character often wore in the comics and cartoons or join the Avengers, but others expressed their wish to see Old Man Logan brought to life, along with some of the plot points in there.

But what would it take to adapt “Old Man Logan” into a movie, if that’s the direction that Fox is going with The Wolverine 3? Like Civil War, the Marvel event that inspired the upcoming Captain America movie, it’ll likely be more of a loose adaptation than a direct one. But that’s only the first step in turning this unique Wolverine story into a film. 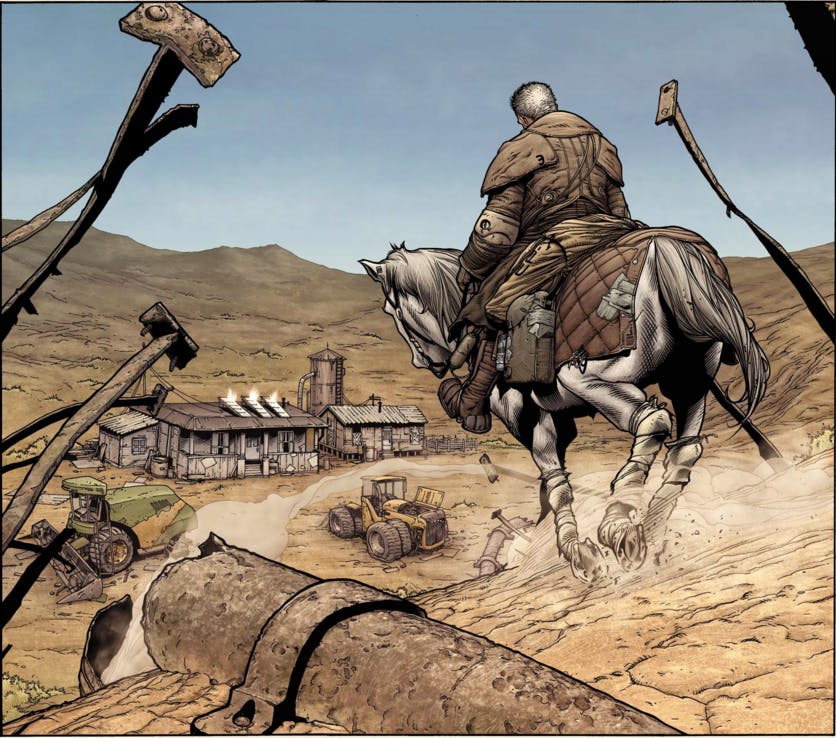 “Old Man Logan” takes place 50 years in the future in an alternate universe—separate from the main Marvel comic book universe—where the world’s greatest supervillains have teamed up and defeated or killed nearly every superhero. Wolverine, going solely by Logan, has settled down in California—a territory run by the now evil Hulk and his inbred descendants. Logan lives with his wife Maureen and their two kids, Scotty and Jade. Most notably, has aged considerably from the character we know and love. (Wolverine does age in the comics, but at a slower rate than humans.)

He’s recruited by Hawkeye, who’s now blind, to travel across the country to deliver a package in exchange for the money Logan desperately needs to pay rent. Along the way, in what’s a classic road trip story as much as a superhero story, Logan and Hawkeye have to fight their way out of some dodgy situations, past supervillains, dinosaurs, and Moloids, and Logan’s inner demons. It naturally gets bloody fairly quick.

Logan hasn’t released his claws since the day the superheroes fell, claiming more than once that Wolverine died that day. Yet it takes Hawkeye some time to actually believe Logan when he says as much. (While we don’t learn what happened until later on, it clearly still bothers him 50 years later.)

The main “Old Man Logan” arc appears in Wolverine #66-72 and Wolverine: Giant-Size Old Man Logan, but the character later shows up in Secret Wars and has an ongoing solo series.

There’s no getting around it: “Old Man Logan” is violent as hell.

Between the Hulk’s grandchildren (known as the Hulk Gang) beating Logan to a pulp for not having the rent, his and Hawkeye’s attempt to rescue Hawkeye’s daughter Ashley (whose mom is Spider-Man’s daughter Tonya) from the Kingpin’s arena in which people are killed for sport, Logan’s actions the day the superheroes fell, and the absolute gorefest of the finale, blood is everywhere. Logan already has a high body count, and even if you toned down the severity of his various wounds, it would be difficult to pull off an adaptation of “Old Man Logan” that’s rated PG-13—the studio system’s go-to rating for the biggest box office draw.

But thanks to the R-rated Deadpool’s box office success, that might not be seen as a problem. 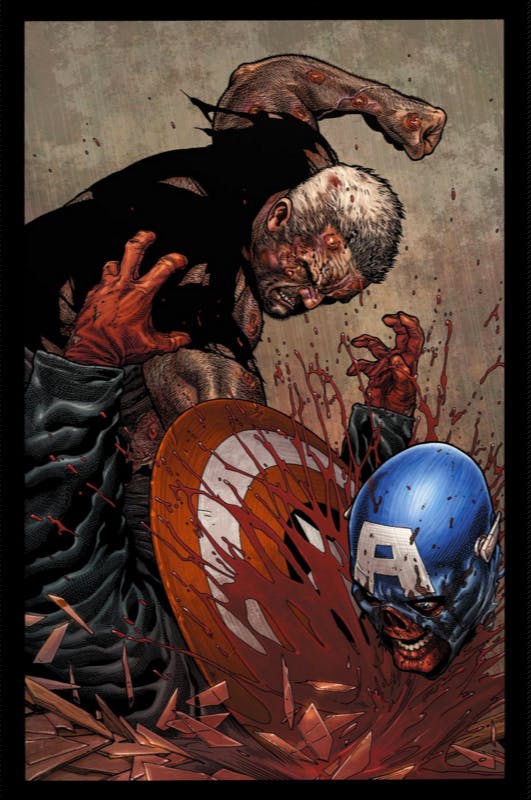 Although The Wolverine 3 was always intended to be an R-rated film, the runaway success of Deadpool certainly proved to Hollywood that R-rated superhero movies can be profitable. That might mean less restraint for filmmakers, while giving them more leeway to choose from famed comic book arcs they want to bring to life—at least until we see a few flops.

If nothing else, these characters can say “fuck” however often they please.

The copyright elephant in the room

So if the violence and gore isn’t the biggest wrench in adapting “Old Man Logan” to the screen, then what is?

Hawkeye. Kingpin. Mysterio. Red Skull. The Hulk. These are all characters with substantial roles in “Old Man Logan” that 20th Century Fox doesn’t have filming rights to due to the complex nature of Marvel’s various licenses. The studio has access to only X-Men, the Fantastic Four, Deadpool, and a handful of other characters.

The filming rights to Mysterio, another key villain in the story, are owned by Sony. Marvel Studios has pretty much everyone else wrapped up in the ever-expanding Marvel Cinematic Universe. 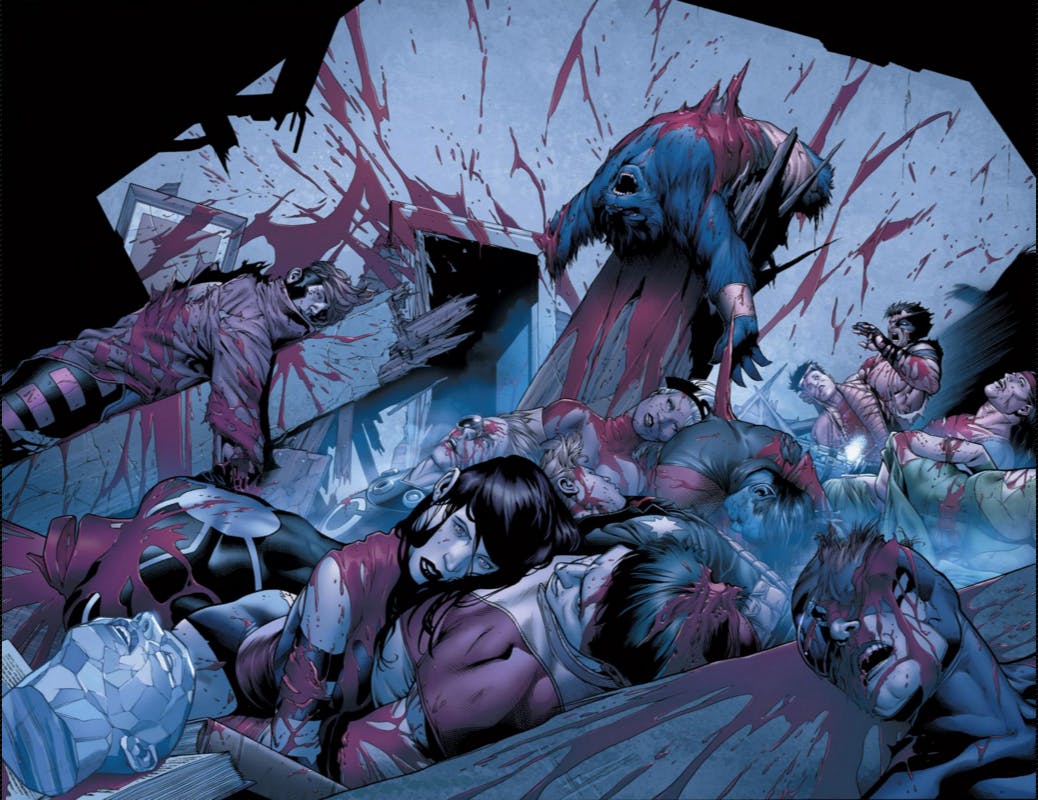 The original Kingpin, last seen in Netflix’s Daredevil, is currently in prison. Red Skull met his end in the first Captain America movie. Hawkeye is a full-fledged member of the Avengers about to get in over his head in Civil War, and the (still a good guy) Hulk is in the same boat.

Hell, Wolverine and Hawkeye even fight a dinosaur that’s infused with Venom (who is owned by Sony). Emma Frost, who they encounter in Wolverine #71, is one of the few Fox-owned characters to make an appearance.

And while there could hypothetically be a cinematic partnership like the one between Sony and Marvel Studios for Spider-Man, it’s not very likely that Marvel Studios would go for a deal that might throw a giant wrench into the MCU’s years of interwoven continuity. It’d probably be less of a headache for 20th Century Fox to find suitable characters in the X-Men universe instead.

Who could replace them?

How do you do it? That’s easy, according to Millar, because the characters themselves are the least important aspect of the “Old Man Logan” story. He plotted Logan and Hawkeye’s road trip route and which cities they would stop in before adding which characters they’d encounter or face off against.

“Basically Wolverine doing The Road movie is the important thing and he has a friend [a blind Hawkeye] with him,” he explained to IGN last year. “But that friend could be Cyclops and he could be blind by the fact that his ruby-quartz visor is broken and he has to keep his eyes closed the whole time and everything, but still insists on driving the car they’re crossing America with. There’s lots of stuff. Instead of the Hulk, you could have the Blob or something.” 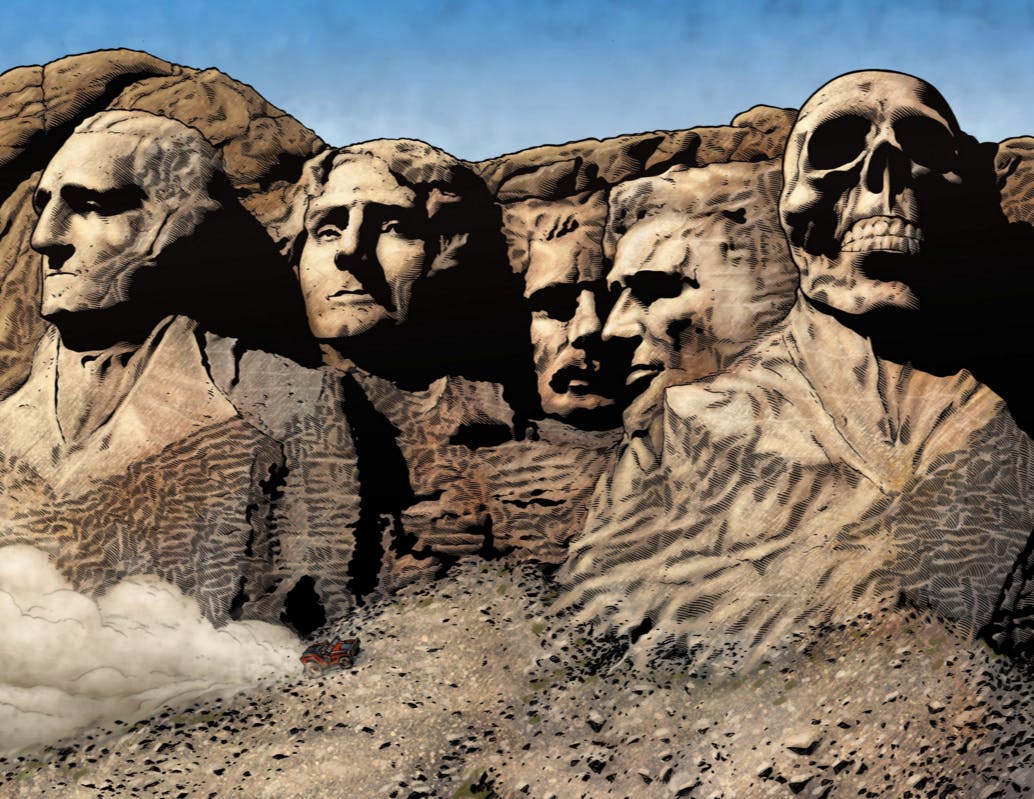 Another character who could fill one of those roles? Charles Xavier. He’s not in “Old Man Logan,” but he will be making an appearance in The Wolverine 3.

“[T]here is, I am told, a Wolverine movie in development that would include Charles Xavier, but in a very different Charles Xavier than the one we have seen before,” Patrick Stewart told Screenrant. “And I don’t quite know what that means, but I am very, very excited about it. I love Hugh, and I love working with him, and James Mangold I believe is set to direct and he is terrific, so we shall see.”

Bringing someone like Xavier, played by the ever-popular Stewart, in to replace Hawkeye would give fans a familiar (Fox-owned) face. He’s someone that Logan knows and respects, and he may be one of the few X-Men who could get Logan to travel and fight with him, albeit begrudgingly and still without his claws.

But what if Xavier isn’t being inserted into the Hawkeye role? It’s always possible that they could be adversaries in a very different world than the one we’re used to seeing.

Get rid of the fridging

“Old Man Logan” is full of manpain. After all, the devastating event that made him abandon his identity after the war was that he was tricked into killing all of his friends and colleagues, helping to create his current situation. It’s understandable, especially when he finally explains what happened to Hawkeye. The story is graphic and doesn’t attempt to shy away from the sheer amount of blood and violence involved in the assault.

But in the end, everything Logan does to earn rent money and keep his family safe is all for naught; the Hulk Gang got tired of waiting and murdered Logan’s family anyway. We don’t get to know Logan’s family in the comics, but their murder drives Logan to release Wolverine (both the persona and the claws) and fuels the entire final issue, Wolverine: Old Man Logan Giant-Size #1.

Naturally, he vows vengeance on the Hulk’s entire family. Later, it’s revealed that the Hulk basically killed Logan’s family (and caused Wolverine to go berserk) so he’d finally have someone worthy to fight again. 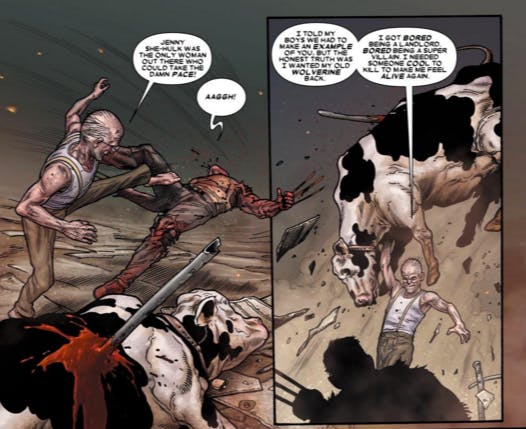 It’s basically fridging an entire family, a plot device not uncommon for Wolverine, who has a long list of dead girlfriends in the comics.

While murdering a loved one to give the hero motivation is still used as a lazy plot device—Gwen Stacy’s death in The Amazing Spider-Man 2 for example, which is taken directly from a famous Spider-Man comic—it’s one that’s pretty outdated. If filmmakers want to make that death, if it does still happen, more impactful, they’ll make Maureen an active part of the story, or use a familiar character in that role. Comic Book Movie, for instance, suggests pairing Wolverine up with Storm in order to make the death more meaningful.

If Logan isn’t paired up with anyone in The Wolverine 3? There are still other characters he’s close to and respects who could fill that void. Of course, the movie won’t be an exact adaptation of “Old Man Logan” so there’s still wiggle room for what may ultimately drive Logan to embrace Wolverine again. But if the filmmakers behind it have their way, it’s going to be as bloody and wild a ride as it is in the comics.