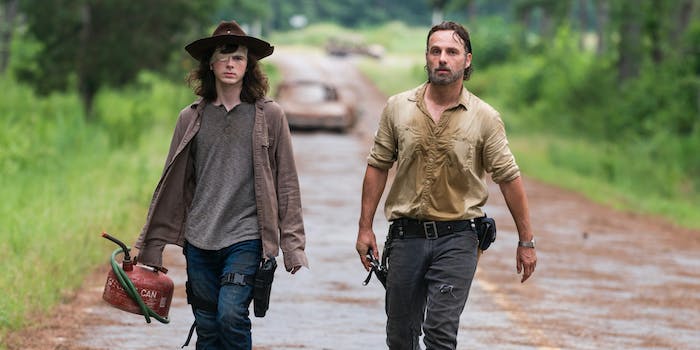 ‘The Walking Dead’ is walking in circles with its latest twist

A mid-season shocker that's both a surprise and completely familiar.

Warning: This article contains spoilers for The Walking Dead season 8.

The mid-season finale of The Walking Dead brought us the show’s biggest shock yet—one that star Andrew Lincoln described as “seismic”—but it’s one that returns us to familiar territory.

We won’t see the death that’s all but guaranteed until the show returns in February, but the final moments of the episode “How It’s Gotta Be” essentially confirmed it: Carl Grimes, the kid who was forced to grow up too quickly in a post-apocalyptic world, is dying. Carl survived capture by sociopaths, multiple gunshot wounds, and Negan’s wrath, and after a half-season of “All Out War,” it’s a bite from a Walker, obtained while he snuck Saddiq (the man he gave food to and aided earlier in the season) into Alexandria, that finally sealed his fate.

It’s a vast departure from the comic books—where Carl is still alive and playing a vital role—and likely a shock to fans and critics who thought that Carl was untouchable. (And he was, up until the moment that he wasn’t.) But despite the insistence that Carl’s upcoming demise is bigger than Glenn’s death last season, it’s returning the show to a familiar payoff: It’s a death designed to alter Rick Grimes’ viewpoint. Glenn’s death transformed Rick into a broken leader. Carl’s death will alter him yet again.

On one hand, of course that’s going to happen. Glenn and Carl have been by Rick’s side since the beginning, so their deaths are bound to leave a major mark. My issue isn’t so much with the fact that they’re affecting him (because again, that’s understandable) but how the show employs those kinds of deaths over and over every time it needs to shake things up before settling back into a similar slump. And it’s far from the only retread we’ve seen in The Walking Dead this season.

With more than 100 episodes under its belt, The Walking Dead has covered a lot. We’ve learned how the Walkers aren’t the true threat in the zombie apocalypse of The Walking Dead. We’ve explored some of the villains’ backstories, allowing viewers to understand and maybe even empathize with them. We’ve seen characters become overwhelmed with the world they live in, offering a helping hand or using precious ammo to take out neighboring communities. The show isn’t shy about killing off members of its cast, but many of those casualties are characters we barely got to know, so the emotional impact is often disjointed.

For a while now, the show has been retreading plots that don’t add to the bigger conversation within the context of the series. (TV Guide noted numerous instances in a recent season 8 episode.) In the end, we have half a season of “All Out War” that ended up being closer to an “All Out Snore.”

We followed Rick’s assault on the Saviors through much of the first half of season 8. It was a rounding success, until the moment it wasn’t. Negan returned to near-full strength between episodes without much explanation, echoing Rick’s first assault on the Saviors. It also wasn’t the first survivor-vs-survivor war we’ve seen on the show: Some characters already living through the Governor’s assault on the Prison in season 3. After he witnessed many of his subjects gunned down by snipers and the death of his tiger Shiva, King Ezekiel broke down and believed himself to be a total fraud. It was only in the mid-season finale that he pushed through and saved the Kingdom from death and misery and allowed himself to be captured. We’ve seen other characters—notably Carol when she first met Ezekiel last season and Morgan in season 3’s “Clear”—teeter toward the brink and become consumed by their own grief and guilt.

While the show certainly can’t kill major players in every episode, it continually struggles to make the audience care about the minor characters’ deaths. We’ve learned little of the people fighting alongside the main cast to the point where fans have trouble remembering who they are. Remember that one character in season 1 who returned only to be shot halfway into the next episode, or the name of the man Maggie saw executed during a confrontation with a group of Saviors. (Seriously, who is Neil?) Bonus points if you can recall the name of the man Maggie shot point-blank in the head at Hilltop to send the Saviors a message.

The Walking Dead won’t return until February, and in that time fans will be left to wonder what might happen or how drastically the show will change when Carl—who will die in the mid-season premiere—is gone. It will affect everyone but likely Rick most of all. Even Negan, who had a soft spot for Carl probably up until Carl duped him in the mid-season finale, might have a surprising reaction. After all, the death of a character who was described as “the future of the show” will leave its mark.

We can only hope that it will take the show into new and interesting directions. If past several seasons are any indication, however, we’re probably venturing off onto a path long overtrodden.