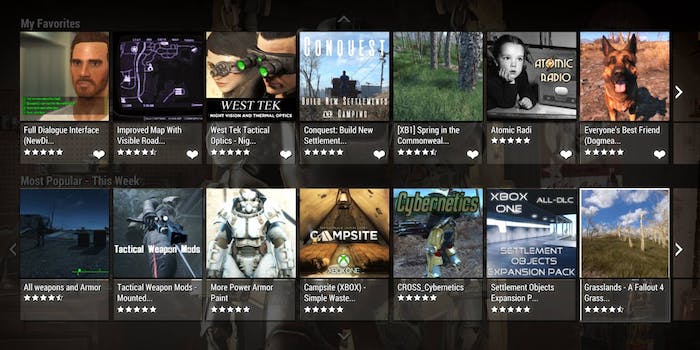 The best Fallout 4 mods for Xbox One

How to make Fallout 4 better, without breaking it.

How do you decide which ways to change Fallout 4 when there are over a thousand mods to choose from?

On May 31, mods went live for the Xbox One version of Fallout 4, and console gamers were finally able to enjoy the world of fan-made content that for years has surrounded Bethesda Softworks PC games, specifically the Elder Scrolls and Fallout series.

You need to create a Bethesda.net account to use mods for the Xbox One version of Fallout 4.  You can add mods to your Xbox One library from the Bethesda site, and they’ll show up on your mods page in your Fallout 4 loading screen menu on the Xbox One.

The Bethesda site breaks Fallout 4 mods into 45 different categories, but there’s an easier, simpler way to consider the list that only requires four categories. 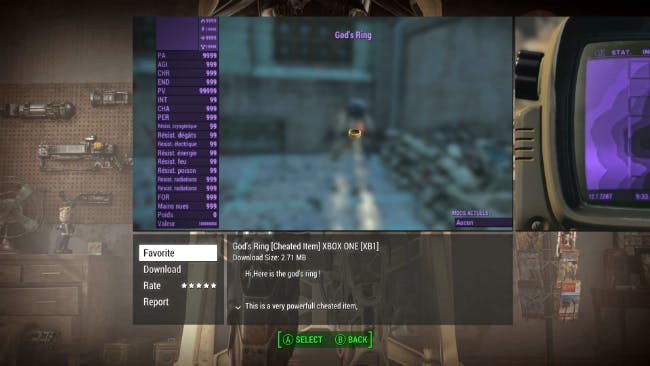 God-mode mods break the game rules by giving you things like armor that make you practically invincible, increased carry weight, and infinite crafting materials for designing your settlements. You can even get all-in-one cheat menu mods. 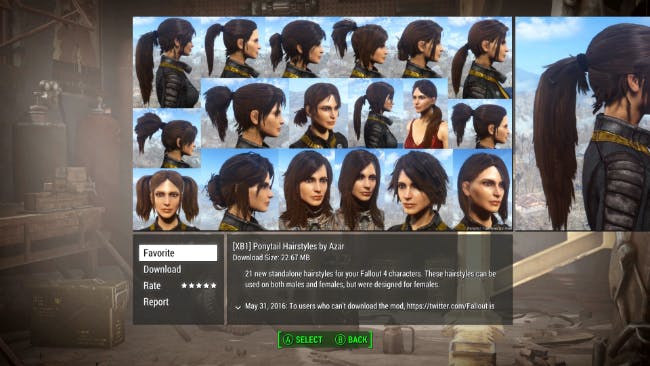 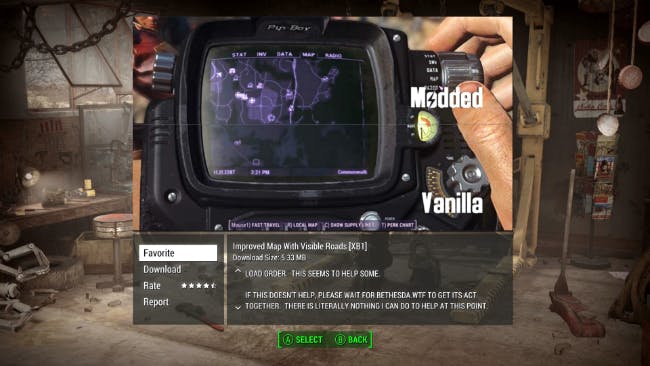 UI mods change user interfaces and displays, and are intended to make it easier to sift through information and interact with the game. 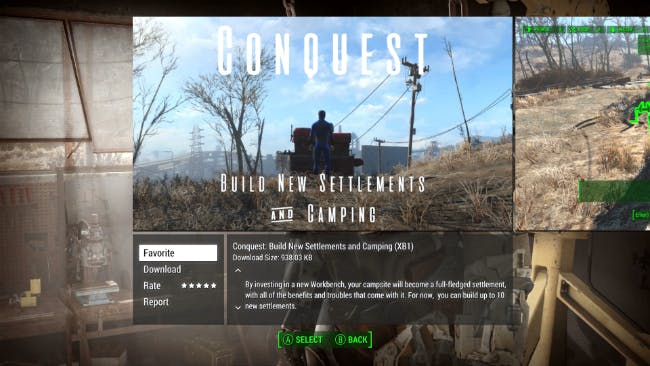 To mod, or not

The first thing to ask yourself before using any of these mods is whether or not you care that Achievements are disabled if you use mods. Mods will extend the life of your game of Fallout 4, but with new DLC being released like the recent Far Harbor expansion, new Achievements will also potentially be added to the game in the future.

You therefore might want to consider saving a separate file just to play around with mods in. As long as you disable any mods you have downloaded before loading a file in which you’ve never used a mod, Achievements will still be enabled for that save file.

The second thing you want to consider is the degree to which you’re willing to break the game or mess with the aesthetics of the Fallout universe as designed by Bethesda. The Elder Scrolls and Fallout games provide immersive environments and work on the mantra of: “Live another life, in another world.” 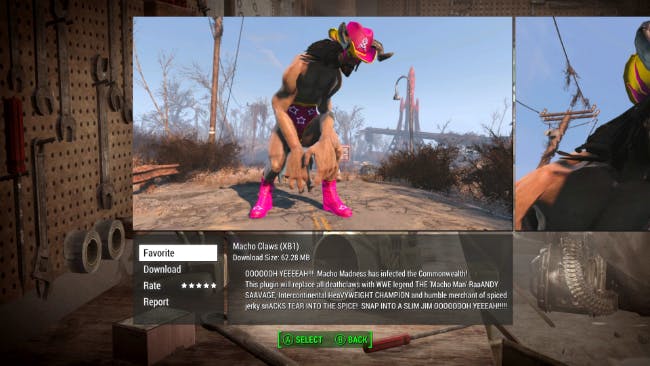 Clearly, when Macho Man Randy Savage shows up in your game of Fallout 4, or when you can’t be killed because you have Godlike powers, this sense of immersion is destroyed.

Make Fallout 4 better without breaking it

We tested 10 mods that improved our Fallout 4 experience without running the risk of ruining that sense of immersion. This list would of course grow over time with the release of new mods, but consider it a guideline as to how you can use mods to improve your game without breaking it. 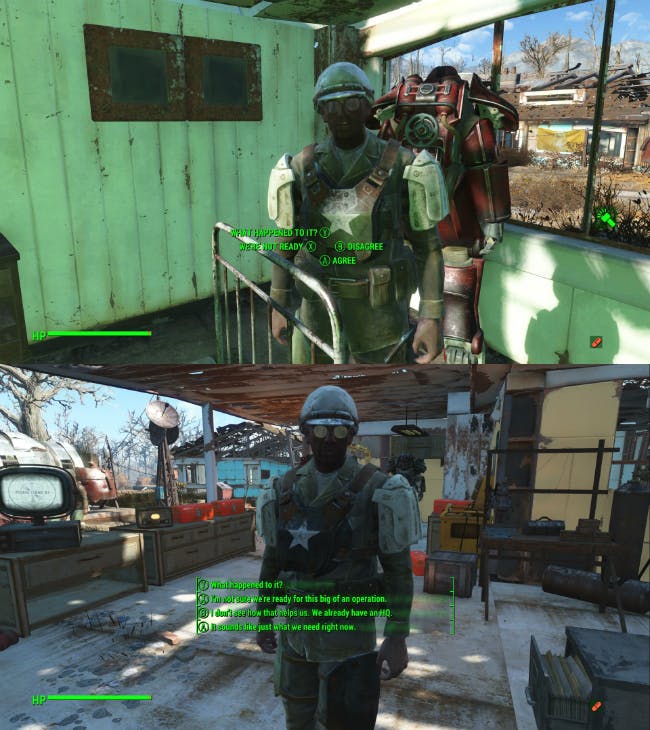 If there is a single “must-have” mod on this list, it’s the Full Dialogue Interface mod. The dialogue choices in Fallout 4 do not make it clear at all what your character is actually going to say when you select one response or another from the available choices. More often than not, the UI implies an attitude to the choices, but you may not fully understand what the ramifications of your choices might be.

The Full Dialogue Interface changes this by giving you an advance look at the precise lines your character would speak if you made that selection. This brings Fallout 4 in line with Fallout 3 and Fallout: New Vegas, which also showed you the full dialogue choices before you selected them. 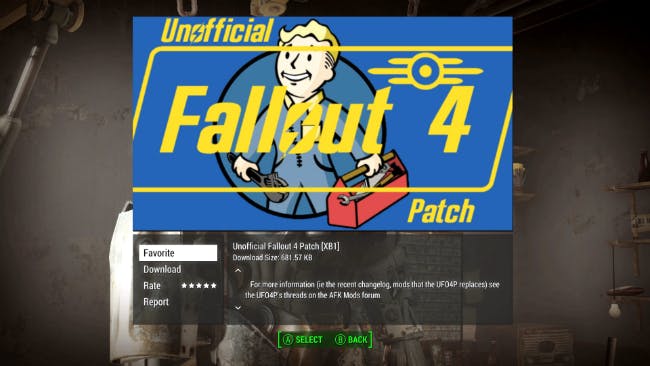 The Unofficial Fallout 4 patch is tough to test because it is meant to address a bevy of different issues with the game. The unofficial patch has over 7,300 endorsements on the Nexusmods community from which the patch originally hails, however, so we’re willing to believe in the efficacy of this mod. 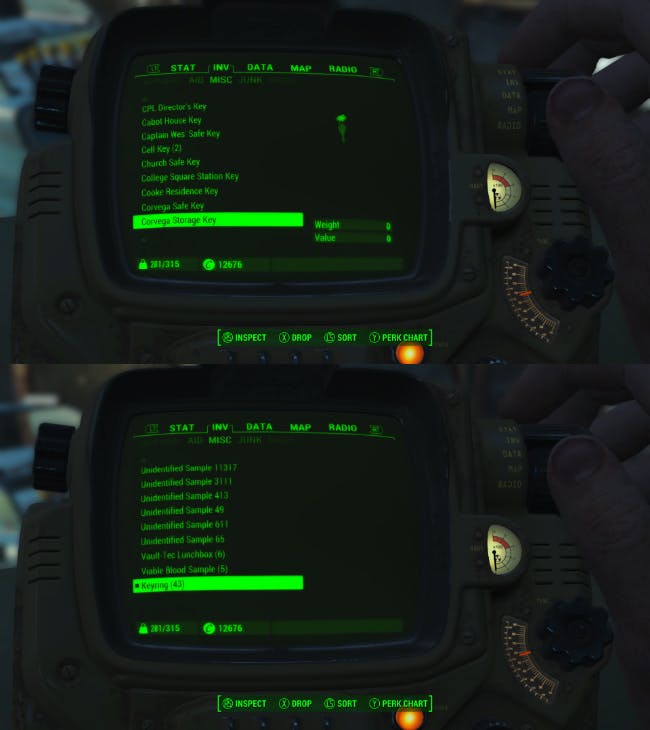 The miscellaneous tab on your Pip-Boy inventory includes all the keys you’ve picked up in the game, many of which you may never use again once you’ve accessed the area that the key unlocks. Having all those keys in the UI gums up the works. The keyNuker and keyRing mod removes all that clutter by sticking all the keys in their own subsection in the Misc tab of your inventory. 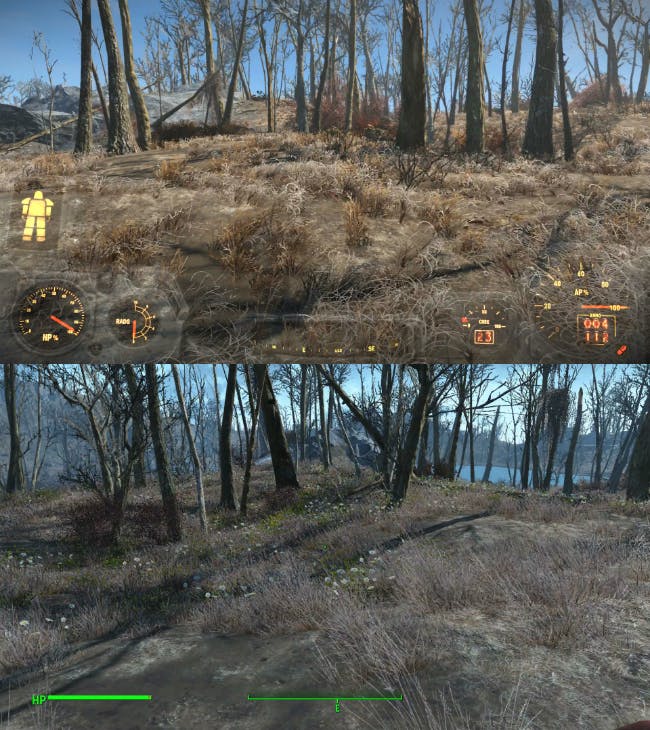 Fallout 4 takes place 210 years after a nuclear war destroyed the world. The landscape is blasted, covered in dead grass, but the Earth probably would have started to heal a little.

The Grass Overhaul – Healthy Edition mod adds clumps of healthy grass and flowers to the landscape, not enough to ruin the idea that you’re wandering a post-atomic wasteland, but just enough to make the ground more interesting to look at. 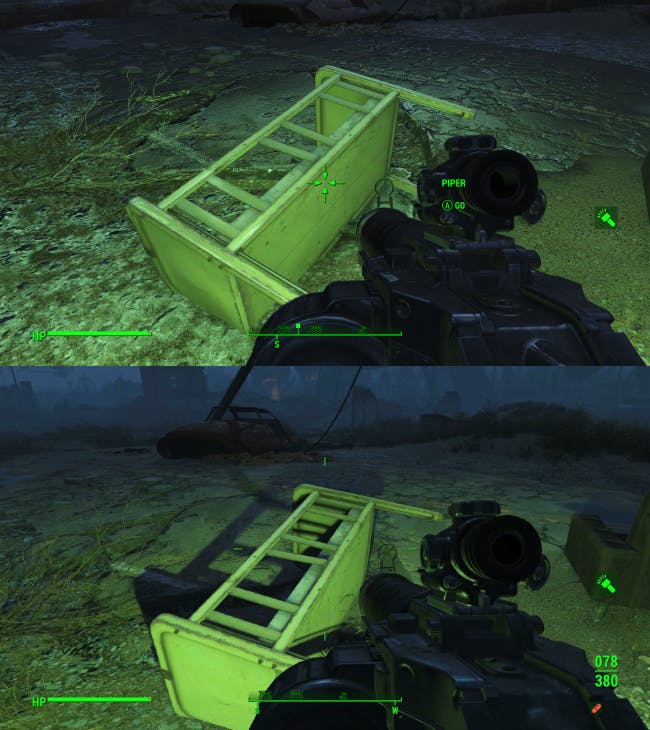 The Pipboy Light Cast Shadows mod makes a huge difference when the light on your Pip-Boy is turned out. The hard shadows that are otherwise absent without the mod are striking and noticeable immediately. This makes for some very cool effects when you’re exploring caves in which you know you’ll be dealing with mutant monsters, or if you’re just exploring ruined buildings in the wasteland. 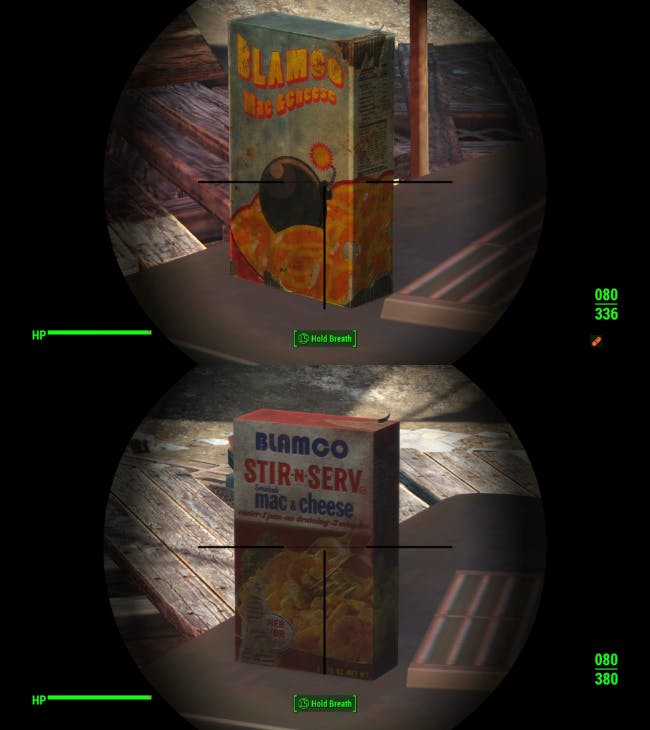 The Ultra Realistic Food mod is silly but does add some extra depth to the graphical experience. The effect is pronounced.

Many content mods make concrete changes to the game world in terms of physical spaces. Some of them are minor changes, and the mods cross the line into the aesthetic category by adding new interior or more details to existing structures, or merely remove closed doors that currently exist in the game and allow you to explore those buildings.

Other content mods add entirely new quest lines, with hundreds of lines’ worth of original dialogue, and introduce new characters.

Most content mods therefore fall outside the parameters of enhancing Fallout 4 without changing it markedly. Two mods technically crossed this line, but also fit so smoothly into the spirit of the original design and are so badly needed that they warranted exceptions.

There simply isn’t enough radio station content in Fallout 4. It’s an aspect of the game on which Bethesda skimped, and especially in the new Survival mode where you aren’t allowed to fast travel anywhere you really could use some fresh music and radio chatter to listen to. 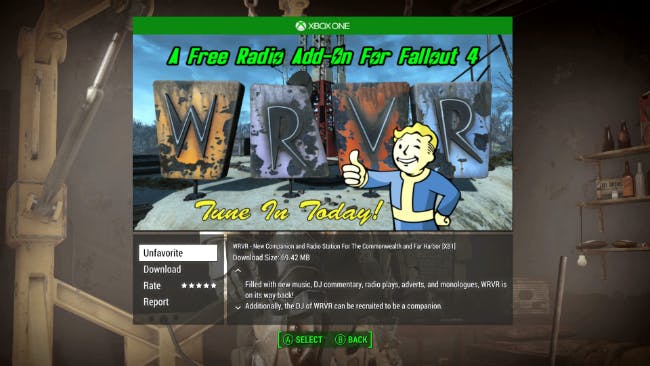 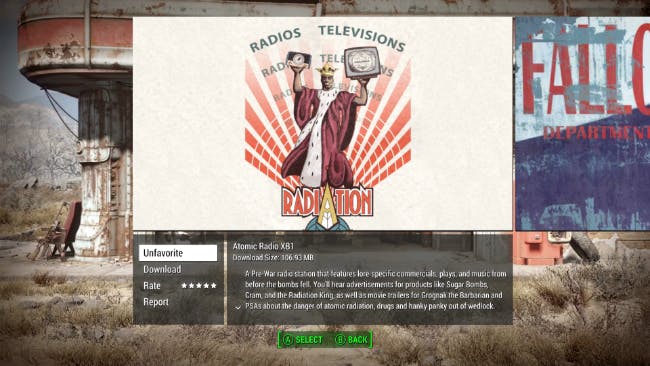 Make sure you keep checking in on the Bethesda.net mods section to look for new mods. While mods on the PlayStation 4 version of Fallout 4 aren’t enabled yet, if you’re a PS4 gamer you can still get a look at what will be available to you, hopefully in the near future.