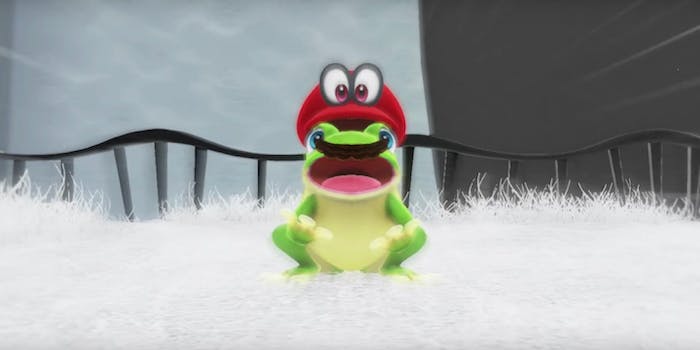 Video games often go much deeper than people tend to give them credit for, and the Super Mario Bros. franchise is no different after one person tied it to moral philosophy.

The presentation, given by @Miexriir, is part of a friendly competition held where everyone prepares a three-minute lecture on “something they were passionate about.” We don’t know what other presentations were given, but @Miexriir’s had the perfect topic, one complete with slides: “Mortality, Religion, & Afterlife in the Mario Universe: A humble plumber’s ties to 17th century Dualism.”

Last night my friends threw another party where everyone had to prepare a 3 minute lecture on something they were passionate about.

I continued my streak of winning best presentation. pic.twitter.com/wqkdEYUzpw

It’s not as far-fetched as you’d think. From the slides posted online, @Miexriir links Mario to philosophical ties with several of the games and shows, the recent one being Super Mario Odyssey. For example, players are able to briefly possess other creatures as Mario by tossing an anthropomorphized hat at them, which @Miexriir compares to Descartes’ philosophy of “mind over matter.”

There are also several Christian symbols throughout some of the earlier Mario games and media, which @Miexriir first noted on Twitter last month.

what she says: I’m fine

what she means: the Mario franchise is littered with references to Christianity that suggest Jesus exists in the mario universe; and I for one won’t rest until I find the Mario Messiah myself pic.twitter.com/fP3RVXht63

And when someone asked about the Underwhere and Overthere, locations from Super Paper Mario that are essentially two sides of the game’s afterlife, @Miexriir brought out an additional slide that demonstrated the locations’ ties to Greek and Christian mythology, respectively.

Granted, we’re only seeing part of the winning presentation, which @Miexriir says went over the three-minute time limit, but it’s enough to have us sold on it.