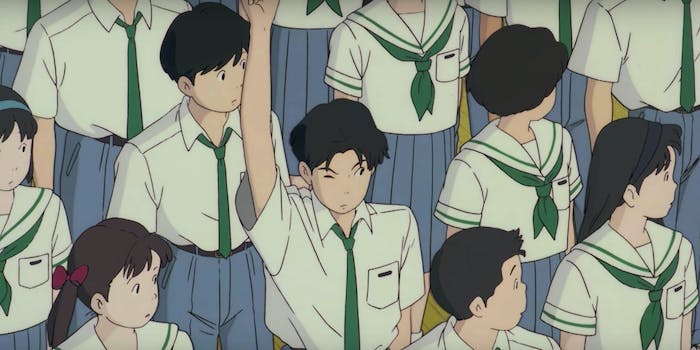 Rare Studio Ghibli film will be released in the U.S. for the first time

Japan’s Studio Ghibli has brought us incredible animated films over the past 30 years, including My Neighbor Totoro, Spirited Away, and Princess Mononoke. But did you know the animation studio also created a made-for-TV movie called Ocean Waves?

Unlike Studio Ghibli’s theatrical releases, Ocean Waves is a rare Ghibli property that’s never been released in North America. But that’s about to change. American distributor GKIDS is hosting a limited theatrical run of Ocean Waves at the IFC Center in New York City starting Dec. 28. Studio Ghibli fans on the West Coast will also get a one-night screening at the Egyptian Theatre in Los Angeles.

We are SO excited to announce that after 23 years we are bringing Studio Ghibli's OCEAN WAVES to North America! https://t.co/uYBij5Sx91 pic.twitter.com/LxQM8E0IOl

If you’re not within striking distance of the theaters in New York or L.A., worry not. A few additional cities are expected to join the limited theatrical release, and GKIDS says Ocean Waves will also be available on DVD and Blu Ray this spring.

In addition to being one of Studio Ghibli’s more obscure films, it’s also one of just a handful directed by someone other than Studio Ghibli founders Hayao Miyazaki or Isao Takahata. Ocean Waves, directed by Tomomi Mochizuki, is a 73-minute teen drama about navigating the challenges of love, friendship, and growing up.