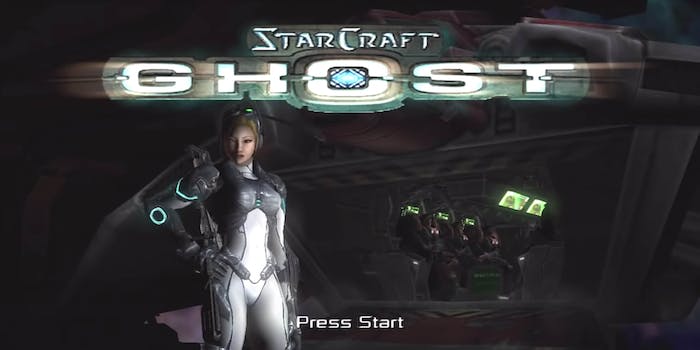 The game was originally announced in 2002.

An unfinished yet partially playable build of Blizzard’s StarCraft: Ghost has made its way online accompanied by the highest-definition footage of the game that the internet has ever seen.

Blizzard’s StarCraft: Ghost has a firmly secured spot within the hallowed hall of fame of so-called “vaporware” games. That is games that were previously announced but vanished without release and sometimes without explicit cancelation. Other titles in this non-genre include Half-Life 2: Episode Three and Beyond Good & Evil 2.

Originally announced for the Xbox, PlayStation 2, and the Nintendo GameCube in 2002, StarCraft: Ghost was advertised as a third-person shooter within the StarCraft universe. The game was intended to introduce the massively popular real-time strategy PC game franchise StarCraft to the console audience via a spin-off.

YouTube user Delso Bezerra uploaded a video that showcases seven minutes and what seems to be two levels of the Xbox build of StarCraft: Ghost. The gameplay looks undeniably unpolished but mostly functional.

Updates on the game originally went cold around 2006. After this, Blizzard moved on to StarCraft II which released in 2010 and went on to become one of the world’s most popular esports.

Blizzard co-founder Mike Morhaime officially announced that StarCraft: Ghost was canceled in 2014. Given the fact that the current footage seems to be coming from a developer kit, it’s probably the most we’ll ever see of this long lost game.