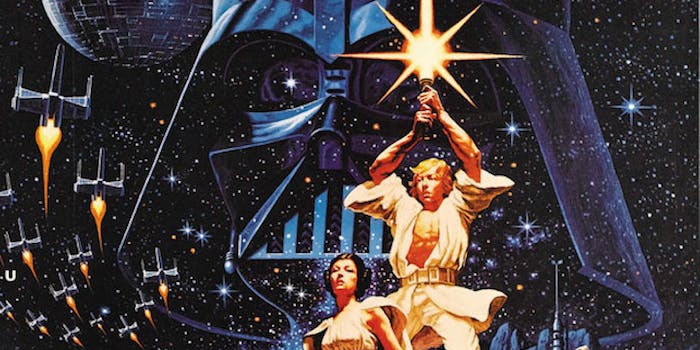 This is the ‘Star Wars’ stylebook you’re looking for

What exactly is the plural of Jedi?

With all the Star Wars news circulating recently, journalists and fans alike have found themselves inundated by potentially unfamiliar jargon. (Is it Siths? That can’t be right.) Fortunately there’s a new Twitter account called Star Wars Stylebook addressing these important terminology quandaries and becoming the one-stop resource for anyone writing or reading about the series.

The stylebook account was started on June 24 by well-known Star Wars blogger Tracy Duncan of Club Jade. Duncan originally posted a style guide for common terms on her blog in 2012 but two weeks ago, the post came to mind again after she saw some @APStylebook tweets.

“They were doing an #APStyleChat on religious terms, of all things, but it suddenly occurred to me that the old post would be a fun, semi-silly kind of Twitter account to do,” Duncan told the Daily Dot. “So the minute I had some free time, I created the account, made the icon, and posted a few things.”

With the tagline “Because every Star Wars fan should know that ‘Jedi’ is a singular plural,” the account shares a lot of helpful spelling and grammar tips as well as important background information on the sprawling fandom and its language. Many of the tweets address errors you’ve probably seen made often; Duncan said she’s bugged the most when people use “Jedis” but also sees a lot of people make “stormtrooper” two words. She said she believes people make so many mistakes with these terms because Star Wars is read less often … or they may just not have retained that there’s a second “e” in “Wookiee.” Duncan understands many of the correct spellings or usages just don’t come naturally.

There are two e’s in Wookiee. And when referring to the mighty Chewbacca by his nickname, it’s spelled Chewie. pic.twitter.com/sdHyvPRsmN

Duncan picked up all these helpful tidbits by reading Star Wars material for more than 20 years and blogging on the topic for 10. She became a fan through the written word, getting hooked on the franchise through the novels even though she saw the movies first.

“While most of the Expanded Universe may not be canon anymore, it’s not like the spelling of lightsaber has changed,” she said. “I can’t claim to be a grammar or spelling savant, but when it comes to Star Wars I’ve just picked up and retained a lot of the terminology and how it’s used. Or at least enough to develop pet peeves!”

There are clearly people eager to use the resource; the account already has over 660 followers. Duncan was shocked by the response.

“The Star Wars Twittersphere, or at least the part that I inhabit, isn’t all that big, and I thought it would be like that first post—we’d spend a few days chatting among ourselves, I’d take a few questions and suggestions, and then move on,” she said. “Instead, it took off among non-geek journalists as well!”

Check out some of the informative tweets below; it’s all stuff fans, professionals, and Jedi (no “s”) alike will find useful.

The animals Luke and Han ride in the beginning of The Empire Strikes Back are tauntauns. One word. pic.twitter.com/oS0ayXimnx

Their formal names are C-3PO and R2-D2, but the phonetic spellings of Threepio and Artoo are also acceptable. pic.twitter.com/Niro7FQARS

Lucasfilm, or Lucasfilm Ltd., is the parent company of Star Wars. It’s not LucasFilm, Lucasfilms, LucasFilms or Lucas Films. Lucasfilm.