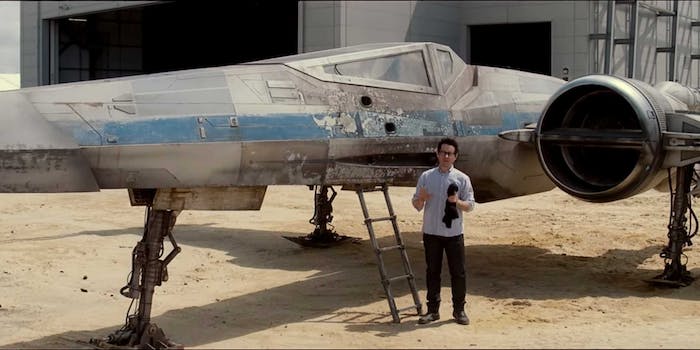 Here’s the teaser trailer for ‘Star Wars: The Force Awakens’

If you're a Star Wars fan, you have to watch this.

The long wait to see the first new Star Wars footage in almost a decade is finally over.

Lucasfilm Ltd. on Friday morning released the teaser trailer for Star Wars: The Force Awakens, the seventh episode in the franchise, exclusively through the iTunes Trailers website.

Shortly after its iTunes debut, Lucasfilm posted it on the official Star Wars YouTube channel.

The leadup to the release of this trailer carried an intensity unique to Star Wars. After a week of rumors that Disney was planning something big for this teaser, Regal Theatres jumped the gun on Monday morning with an announcement of special Thanksgiving weekend preview screenings. Later, other theater chains joined in, and as of this weekend, 30 theaters in the U.S. and Canada are showing the teaser before every screening of every movie.

Many fans still weren’t happy that they would have to go to one of these theaters to be among the first to see the trailer. Lucasfilm calmed them down when it announced that the trailer would also debut on iTunes, although it didn’t announce a specific time. Because this is Star Wars, diehard fans didn’t take any chances. Many of them stayed up until 3am ET, which is midnight for California-based Apple and Lucasfilm, in the hopes of catching the footage after furiously refreshing the iTunes Trailer website.

One prominent Star Wars podcast even organized a Skype text chat that scrolled a mile a minute in the waning hours of Thursday and early hours of Friday.

We have a Skype chat going with listeners & podcasters as we wait for a possible #TheForceAwakens teaser! Send us your username to join in.

After that plan didn’t pan out, fans remained upbeat, knowing that they were still just a few hours away from new Star Wars movie content.

As everyone goes to get some rest, thanks to all for joining in the #TheForceAwakensChat! It was well worth it!

Now that the trailer is finally available, hit the iTunes trailer link above—and may the Force be with you.