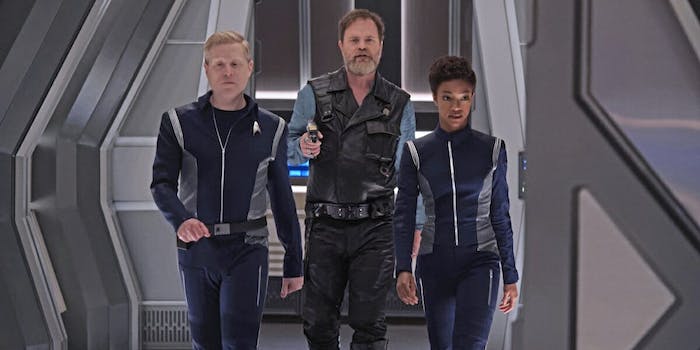 ‘Star Trek: Discovery’ aired a time-loop episode—and it was awesome

This episode was a perfect blend of old and new 'Star Trek' styles.

Zap me with a disruptor cannon and throw me to the Klingons, because Star Trek: Discovery just became everything I hoped and dreamed. Specifically, it aired a time travel rom-com adventure with a subplot about wildlife preservation. And how did our heroes save the day? By talking about their feelings. This is what Star Trek is meant to be.

In most time-loop stories, only one character recognizes they’re trapped in Groundhog Day. Here it’s Lt. Stamets, who has a hard time persuading people he’s not crazy. Ever since he modified himself with tardigrade DNA, he’s been acting weird. Weird enough that his boyfriend is tailing him through the corridors like a medical escort, apologizing whenever Stamets starts hugging random people or babbling about time travel.

Breaking the mold for this particular trope, we don’t see things from Stamets’ point of view. Instead, the episode follows Michael Burnham as she navigates the same party over and over again, interrupted by the surprise appearance of conman Harry Mudd.

The last time we saw Mudd, he was locked up in a Klingon prison. He’s predictably pissed at Captain Lorca for leaving him behind, but as you’d expect, he has a secondary motive for revenge. He wants to sell the Discovery’s spore drive to the Klingons. Armed with a time crystal (actually a real thing!), he creates a 30-minute loop so he has an unlimited number of do-overs to familiarize himself with the ship. Then he tricks his way onboard by hiding inside an endangered creature called a Gormagander, which Lorca must rescue due to Starfleet’s conservation guidelines. (It’s amusing to see the contrast between this and Lorca’s cavalier attitude to the tardigrade, a similarly rare species. But what is Star Trek, if not a tangled web of contradictory canon?)

I hesitate to say that Discovery “found its feet” this week, because I appreciated earlier episodes despite my misgivings about the overly grim tone. Still, this episode exemplifies what I hoped the show would become. Without feeling like a retread of previous series, it combines the expensive, high-octane style of Discovery with the warmth and camaradery of classic Trek. The crew felt like a real community for the first time, complete with sincere emotional moments, dorky humor, and teamwork.

The loop begins during the crew party, where Burnham is thoroughly out-of-place amid the beer pong and dancing. After mishandling her burgeoning crush on Tyler, Burnham is called to the bridge, where Lorca discovers the Gormagander and unintentionally brings Mudd onboard. From then on, Mudd repeatedly destroys the ship and resets the time loop, with Stamets as the only person who remembers what happened.

As Mudd’s former cellmate, Tyler has insight into Mudd’s capabilities. But in order to get that information, Burnham needs to get close to Tyler. That’s easier said than done, because while he clearly wants to spend time with her, Burnham has absolutely no game whatsoever. None. Stamets has to coach her through the process of approaching Tyler, in one of my favorite scenes this season.

After confronting Sarek on his dubious parenting techniques, Burnham has entered a new phase of emotional vulnerability. It’s a sweet portrayal of someone going through a second adolescence, learning how to socialize like Bambi learning to walk. Skipping the smalltalk, Burnham goes directly from Vulcan formality to intimate, open conversations. She’s lucky to have the friends she has. Tilly is bubbly and supportive, Tyler is persistently friendly, and Stamets (in his current state, anyway) is a Luna Lovegood-esque combination of affectionate and eccentric. Teaching Burnham to dance, he shares his personal advice on love: “Never hide who you are. That’s the only way relationships work.” Apparently he and his boyfriend got together after Stamets told him to “get lost,” a scenario that sounds more like the irritable old Stamets than the touchy-feely guy he’s become.

Once Burnham has kissed Tyler and interrogated him for Mudd-related information (a loop that sadly gets erased from their memories), they can formulate a plan to rescue the ship. Naturally, it plays on Mudd’s greed. Offering herself up as a hostage, Burnham—a highly desirable target for the Klingons—forces Mudd to create one last time loop. Lorca strikes a bargain, allowing Mudd to sell Burnham and the ship to the Klingons, as long as the crew survives. Of course, it’s a trick. Instead of calling the Klingons, Tyler contacts Mudd’s long-suffering wife Stella, who arrives to pick him up. (Dressed, I might add, in a costume fit for the lively color scheme of the Original Series.)

This gives us some illuminating backstory for Stella, a recurring character throughout Mudd’s appearances. The Original Series introduced her as a stereotypical shrew, constantly criticizing Mudd’s criminal ways. In one episode he builds an android version of her, just so he can tell her to shut up on command—although he gets his comeuppance when he’s trapped on a planet with hundreds of nagging robot wives. Ah, the 1960s!

Stella is more sympathetic in Discovery. She comes across as a naive rube who fell hard for Mudd’s dubious charms. Instead of letting him leave, she hunts him across the galaxy to renew their marriage—even though it’s obvious to everyone else that he doesn’t love her. Mudd thinks of no one but himself, fueled by a deep well of aimless resentment. “I’ve been screwed over since the day I was born,” he growls, conveniently shifting the blame for his crimes.

While Burnham got plenty of emotionally important scenes in this episode, Stamets was the star. He was already an unusual character, because we barely had a chance to meet the “real” Stamets (geeky; disgruntled; kind of mean) before his tardigrade transformation. Now, Anthony Rapp’s performance hovers on the border between funny and unnerving.

We can laugh at Stamets in some scenes, but we also know that his behavior is genuinely alarming for his boyfriend Dr. Culber. He has to watch his partner change before his eyes, and while some might argue the change is an improvement—Stamets is a lot more emotionally open now, and arguably more fun—that’s not what Culber signed up for. He just wants Stamets to be OK, and as a doctor, he has no idea how to handle such a bizarre medical situation. Worse still, Starfleet has no real motivation to reverse his condition. Without Stamets’ modified DNA, the U.S.S. Discovery loses its secret weapon.