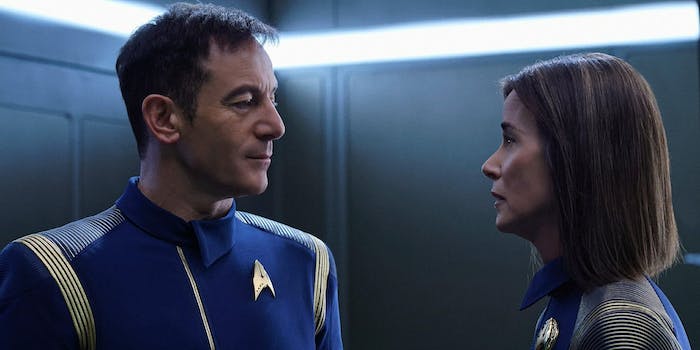 Lorca hooked up and Michael Burnham explored her Vulcan backstory in this emotionally intense episode.

Michael Burnham is the the protégé of Spock’s father Sarek, a decision that ruffled some feathers among Star Trek fans. If she had such an important role in Spock’s family, why didn’t he mention her before? To my mind, it really doesn’t matter. Star Trek V introduced Spock’s half-brother Sybok with no prior warning, so why can’t he have an adoptive sister, too?

Sarek returned to Star Trek: Discovery this week, for an episode exploring Burnham’s Vulcan upbringing. Like Spock, Sarek raised her with punishingly high expectations, hoping to prove that humans and Vulcans can coexist. She achieved top grades as a Vulcan student, but was rejected by the Vulcan exploration fleet—something she saw as a personal failure. In reality, they rejected her because she was an outsider. Despite their philosophy of IDIC (“Infinite Diversity in Infinite Combinations”), Vulcans are obsessed with their own cultural superiority. As Spock discovered firsthand, this is the defining hypocrisy of the “logical” Vulcan mindset.

Discovery has cleverly integrated Burnham’s role into Spock’s backstory, without interfering with existing canon. You can already sense how she influenced his life, even if they weren’t close. She followed the path assigned by Sarek, yet “failed” because she was human. Meanwhile Spock, who is a few years younger, grew up to rebel against his father. Facing bigotry against his half-human heritage, he abandoned Vulcan to join Starfleet, and feuded with Sarek for the rest of their lives.

It feels right for Burnham to resolve this conflict more easily than Spock. As Sarek’s biological Vulcan child, Spock could never escape Sarek’s expectations. Burnham, on the other hand, was originally raised by human parents, and went on to have Captain Georgiou as her mentor. She has more freedom to confront Sarek’s flaws as an adult, ultimately deciding that a wholly Vulcan path is not for her. 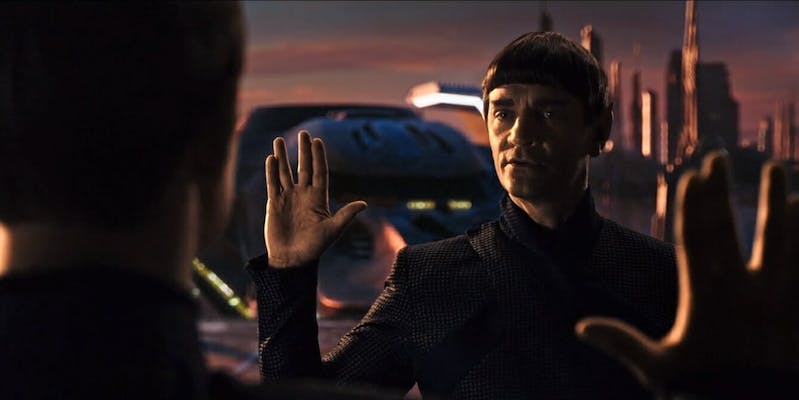 When Sarek’s shuttle is sabotaged on a diplomatic mission to the Klingons, Burnham senses his distress. She, Tilly, and new crew member Ash Tyler mount a rescue mission, with Burnham using the psychic link we saw in episode 2. The result is an unconventional family therapy session, with Burnham visiting a painful memory from their shared past.

In his delirium, Sarek relives what Burnham saw as a life-changing failure: her rejection from the Vulcan Expeditionary Group. She assumes that Sarek remembers this day with similar bitterness, but then Tyler makes an interesting observation. He points out that when people are dying, they don’t think about other people’s failures—they think about their own regrets. Sarek regrets something about Burnham’s departure from Vulcan, and it’s a perfect encapsulation of his fallibility as a parent.

Rather than refusing Burnham outright, the Vulcan Expeditionary Group gave Sarek a choice. They’d accept one of Sarek’s “non-Vulcan” children, but not both. So Sarek picked Spock, who eventually turned it down and joined Starfleet instead. Sarek allowed Burnham to believe she was at fault, and she finally gets some closure when he tells her the truth. She’s not a failure, and Sarek isn’t always right.

Discovery’s Sarek is smug and largely oblivious to his own failings, viewing fatherhood as a benevolent dictatorship. He’s a fascinating character, with one caveat. This episode introduced his wife Amanda Grayson (Mia Kirshner), and her role was pretty underwhelming. Overshadowed by Spock and Sarek throughout the franchise, she deserves more than a cameo as “Supportive Mom.” What kind of person marries an alien and joins him, alone, on his inhospitable home planet? We don’t really know, and Discovery is an ideal opportunity to find out. I assume Amanda will return, but so far, this version has less personality than the vivacious middle-aged socialite we met in the Original Series.

While Burnham grappled with Sarek on the astral plane, Captain Lorca was busy doing what he loves best: manipulating people. Needless to say, I loved this. Previous episodes suffered from a lack of personal detail, but “Lethe” was all about relationships: Burnham and Sarek, Burnham’s new role as Tilly’s mentor, Ash Tyler’s oddly cheerful return to Starfleet, and Lorca’s hookup with Vice Admiral Katrina Cornwell (Jayne Brook).

Superficially, it’s refreshing to see Lorca with an age-appropriate partner. God knows that’s a rarity on TV. But beyond that, this was an interesting choice for Discovery‘s first sex scene. Cornwell is here to check up on Lorca’s mental health, and while the two officers are old friends, there’s an undercurrent of distrust in their conversation. Cornwell (rightfully) thinks Lorca is unfit for command, while Lorca will do anything to keep control of the Discovery. When they sleep together, it feels more like a power play than a tryst—and Lorca’s plan backfires. Cornwell touches a scar on Lorca’s back, and he flips out and points a phaser at her head. Solid proof that he’s dangerous.

We’ve only known Lorca as a ruthless and volatile military commander, but according to Cornwell, he wasn’t always like that. He changed after the loss of his last ship, and Cornwell believes he’s become too unstable to captain a ship. She plans to report him to Starfleet, but then a reprieve arrives from an unlikely quarter. After replacing Sarek on his diplomatic mission, Cornwell gets kidnapped by Klingons. How convenient!

Aside from a few moments of needlessly obvious exposition, “Lethe” was a very satisfying episode. It had a more comfortable balance between plot and casual scenes, including a charmingly old-school arc for Burnham and Tilly. Burnham adopts a new role as Tilly’s overbearing mentor, micromanaging her career plans and nutritional intake before learning one final lesson from Sarek’s example: Tilly must find her own way. Meanwhile Saru was left on the backburner, although we did get one rather ominous scene with Stamets. Following last week’s DNA splice, he’s gone through an abrupt personality change. Is he just feeling chipper because he made a breakthrough, or is it something more sinister? Either way, Stamets would not have used a word like “groovy” before.

Episode 5 inspired an elaborate theory that Ash Tyler is a Klingon spy, and “Lethe” did nothing to allay my suspicions. There’s something fishy about this guy. 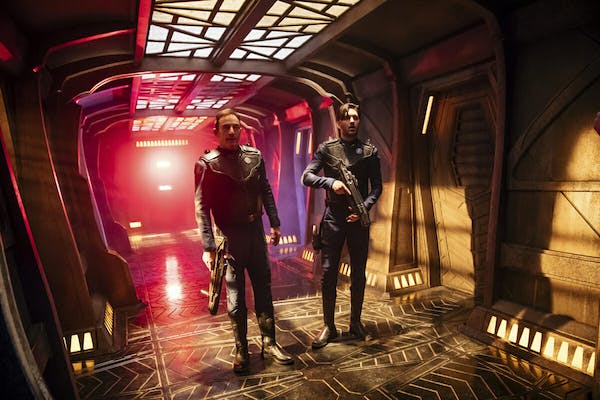 Just as a final note, Tilly and Burnham’s “DISCO” T-shirts were a stroke of genius. Simple, recognizable, and fun. They’re going to sell like hotcakes.