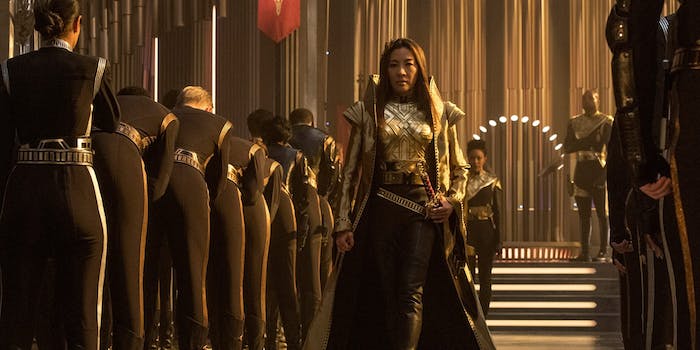 Michelle Yeoh's return was worth the wait.

Emperor Philippa Georgiou’s throne room looks like a cross between a Roman reenactment event and a disco cabaret in a hotel ballroom. A cabaret where the final act is… murder!

This flavor of sparkly, cape-wearing melodrama is what makes the Mirror Universe so great. It may be a terrifying dystopia (this week, Michael unknowingly ate an alien slave), but the costumes and supervillain posturing balance out the darkness. It’s very much in line with the S&M pantomime of the original 1960s episode “Mirror, Mirror,”  just with smarter worldbuilding and a bigger budget for accessories.

Undercover at the Emperor’s palace, Michael and Lorca’s mission soon goes wrong. Apparently, Mirrorverse Michael was secretly in cahoots with Mirror Lorca’s rebellion, conspiring against her adoptive mother Georgiou. Instead of trying to lie and trick her way out of a death sentence, Michael pulls a very Starfleet move. She tells Georgiou the truth: She’s actually from a parallel universe, and needs some classified files to find a way home. (For more information, watch the Star Trek: Enterprise two-parter “In a Mirror, Darkly.” Or don’t, because it’s terrible.) Georgiou agrees, in exchange for Discovery’s spore drive schematics.

Hopefully, Michael has another trick up her sleeve, because right now she’s being dangerously trusting in an untrustworthy universe. But that isn’t her only problem. While revealing her secret to the Emperor, she uncovered another one. Lorca was actually from the Mirrorverse all along, confirming a long-held fan theory that was foreshadowed from the start. I do appreciate Discovery’s habit of laying the groundwork in advance, rather than dumping a plot-twist on our heads like a bucket of cold water.

Lorca’s origins explain his ruthless attitude and, surprisingly, his visual sensitivity to light. This is the one genetic difference for Mirrorverse humans, giving us a canonical explanation for their love of dramatic mood-lighting. But even now, Lorca’s plan remains unclear. Georgiou tells us that he groomed Mirrorverse Burnham as his lover, forcing us to reevaluate his interest in Michael’s career. Is Mirror Burnham dead, or did she wind up in the Federation’s universe? If she’s alive then Lorca has a compelling reason to help the Discovery get home, swapping the two ships so he can get his partner back.

I wasn’t in favor of the Mirrorverse Lorca theory at first, mostly because “evil twin” seemed like a less interesting idea than “this guy needs therapy.” Now, I’m sold. Jason Isaacs is just a delight to watch, honed by decades of villain roles from Captain Hook to Lucius Malfoy to the weird eel guy in A Cure for Wellness. He’s good at snarling viciously, what can I say?

A clearing in the forest

As Discovery’s temporary captain, Saru has to handle two medical emergencies: Stamets and Tyler. Now Tyler has discovered his Klingon identity, his mind is fracturing. L’Rell is the only one who can help, but Saru has to do some clever maneuvering to persuade her. I still wish Saru got more screentime, but this subplot really illustrates how far he’s come. In earlier episodes, he was petty, uncertain, and ruled by fear. Now he’s in command during an emergency situation, he’s found his feet as an officer. By playing on L’Rell’s affection for Voq/Tyler, he manipulates her into saving him.

When asked why she won’t help Tyler, L’Rell’s original answer was simple: “That is war.” Voq already made his choice, and she respected him enough to leave him to his fate. A few scenes later, Saru returns with proof of Tyler’s agonizing internal conflict and drops his unconscious body into her cell. “That is war,” he says, showing how Voq’s Klingon and human halves are tearing each other apart. L’Rell agrees to help, and by the end of the episode, Tyler has switched back from Klingon to English. L’Rell roars the Klingon Death Wail, but does that actually mean Voq is gone? Doubtful. It seems more like he integrated his two personalities, meaning that Voq’s Klingon purity is “dead,” but his memories and soul survive in a different form.

Down in Engineering, Stamets is still unconscious. He meets up with his Mirrorverse counterpart in the mycelial network, and may I just say that Mirror Stamets is a delight? Evil yet perky; what a fitting counterpoint to our Stamets’ grim situation.

In a classic sci-fi TV example of “let’s reuse all these corridors we already built,” Stamets and Stamets run around a psychic recreation of the ship. Ominous shadows lurk in the background, but that’s not what we’re here for. The real draw is a ghost of Dr. Culber, offering Stamets a memory of domestic bliss while helping him come to terms with his boyfriend’s death. Rather than going the obvious route of seducing Stamets into eternal sleep, Ghost Culber actually wants to help. He guides Stamets to consciousness, where he awakes to discover a disaster: the spore forest onboard Discovery is infected with a Mirrorverse-related disease.

We’ve been promised an ongoing role for Stamets and Culber’s relationship, but something tells me this isn’t it. It’s not even clear if the person we saw this week was Culber, rather than a figment of Stamets’ imagination. He could be a sentient representation of the mycelial network, assisting Stamets as a self-preservation technique. I’m still rooting for Stamets to go on a universe-jumping mission to find his lost love, but dating a Spore Phantasm is an intriguingly weird alternative. He loves Culber and he loves fungus; it’s practically a win-win, given the circumstances.