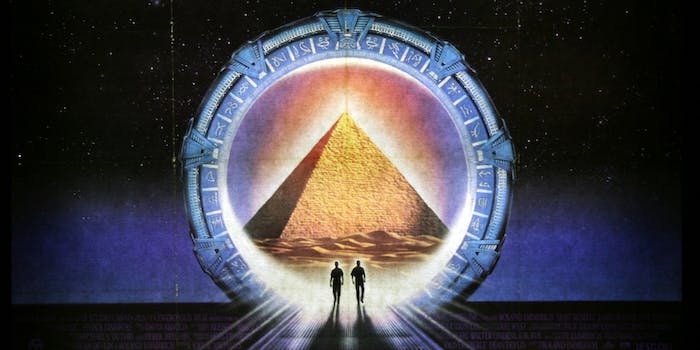 Sorry SG1 fans: It won’t be connected to the TV canon.

Writer/director Roland Emmerich has finally confirmed his plans to continue the franchise he inspired with the classic 1994 sci-fi movie, though the new movies are unlikely to star the original actors Kurt Russell and James Spader.

Thanks to the success of the long-running Stargate spinoff shows, rumors of a new movie have been going around for years. However, Emmerich has said in the past that if he did ever decide to make a sequel, it wouldn’t be connected to the TV canon.

While Stargate: SG1, Stargate: Atlantis, and Stargate Universe ran for a combined 17 seasons and are still an unavoidable fixture at sci-fi conventions, they are essentially an official fanfic spinoff of Emmerich’s movie. The new trilogy won’t be including any backstory details from the TV franchise, or references to any characters who didn’t appear in Stargate.

It will be interesting to see how the new Stargate movies compare to Ridley Scott’s Prometheus sequels and upcoming television series Pharaoh, which both share the same basic premise of “aliens built the pyramids.” Stargate and its TV spinoffs have always been relatively lighthearted about the ridiculous nature of this idea, while Scott’s love of the “ancient aliens” trope often comes across as weirdly serious. The quasi-religious subtext of Prometheus threw a lot of Alien fans for a loop, because they went into the movie expecting science fiction but wound up watching Ridley Scott’s take on an intergalactic creation myth.

Along with the Stargate announcement, Emmerich also revealed the release date for his sequel to Independence Day: July 1, 2016. Will Smith won’t be returning for this movie, but Jeff Goldblum and Bill Pullman are reportedly going to reprise their roles. Emmerich, a noted LGBT activist, has also confirmed that the movie will include a gay character, which will likely be a first for this type of big-budget summer blockbuster.