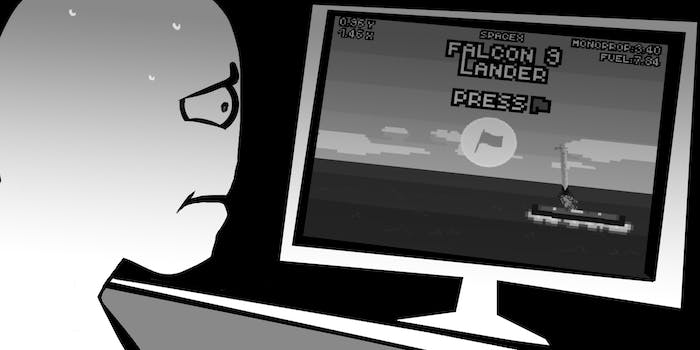 Well if you think it’s so damn easy to land SpaceX’s Falcon 9, you try it

Did you know that landing a ship on the Moon is easier than landing a rocket on an ocean platform?

SpaceX Falcon 9 Lander is a browser-based physics puzzler game in which you attempt to simulate a successful landing of the SpaceX company’s reusable Falcon 9 booster rocket, which Elon Musk hopes will revolutionize space travel.

The problem is figuring out how to bring the rocket down safely. For now that means attempting to land the booster on a barge in the ocean, because the ocean is the safest place to crash a giant tube containing explosively flammable rocket fuel. Just in case things go wrong—as has been the case with all three attempted recovery attempts of a Falcon 9 booster thus far.

The closest SpaceX got to success was making a touchdown on the barge, after which the booster tipped into the ocean and subsequently exploded.

SpaceX Falcon 9 Lander is built in Scratch, software developed by the Lifelong Kindergarten Group at the MIT Media Lab that is free to download and use. Scratch community member Dixiklo remixed SpaceX Falcon 9 Lander from another one of his Scratch games, Lunar Lander, which is a hell of a lot easier to play.