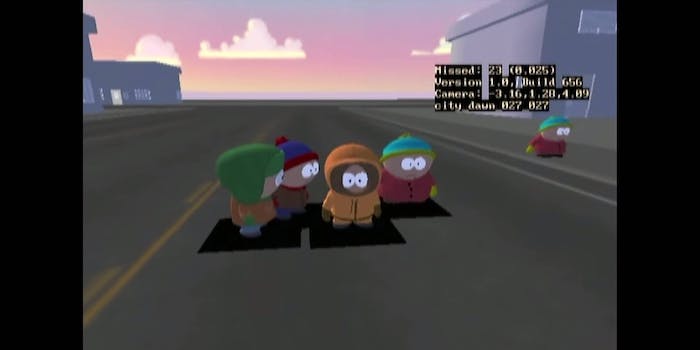 It's barely playable, but that's part of the fun of this new footage.

New footage has emerged showing a never-released South Park game designed for the original Xbox—and it’s nothing like the 2014 game The Stick of Truth.

Buzz Monkey Software, a Eugene, Oregon, studio now owned by Zynga, created the game, which was found running on an Xbox development kit in a pre-alpha state.

In pre-alpha form, the game is almost unplayable; the hosts from HappyConsoleGamer, the YouTube channel that shared the footage, had to reboot the game multiple times just to explore all of Cartman’s house.

The game looks a lot like South Park games of yore: Instead of trying to mimic the 2D cardboard-cutout art style of the show, it opted for full 3D models. That makes sense, because the game was meant to be a Simpsons: Hit and Run clone—essentially, Grand Theft Auto but for South Park.

A moderator on the Nintendo Age Forums unearthed footage of a cutscene from this never-released game in 2014. It’s a bit unnerving, but interesting nonetheless.

Hopefully this video can satiate your South Park appetite as we all patiently await the release of The Fractured But Whole.