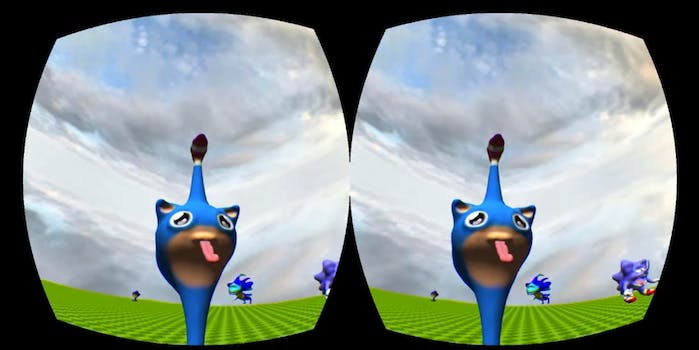 ‘Sonic the Hedgehog’ is terrifying on Oculus Rift

This isn't the game you remember from your childhood.

This isn’t your childhood Sonic.

The speedy hedgehog has been zooming around video games for decades now, but now there’s a new fan-created Sonic demo. Based on the Sanic Hegehog meme called Sanic 06, it’s now available for the Oculus Rift, and it’s one trippy experience.

This game is the stuff of psychedelic nightmares, and while you’ll be sure to recognize some of your favorite characters, there’s something very off about it—and not just the way everything is animated.

The demo is the result of a developer trying to teach himself Unity, a graphics engine, over the course of six weeks.

“It is just my way of figuring out how to get Unity to cooperate with me,” AjDaLolma wrote on deviantART.

Want to take a ride of your own? The demo’s free to download.