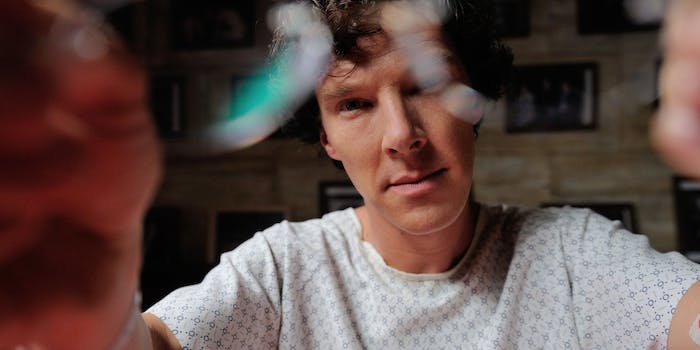 Sherlock's boss is cool with fans invading the film sets. Kind of surprising, but good news for spoiler fans!

The co-creator of Sherlock says the #Setlock phenomenon is nowhere near as serious as some people think.

Setlock is the term used among fans who visit the show’s filming locations so they can take photos and watch the actors perform. Members of the cast and crew have expressed discomfort with receiving this much attention on set. Actor and writer Mark Gatiss even said that some scenes were rewritten to avoid filming in public locations.

Ever since Setlock started gaining popularity, Sherlock fans have been arguing about whether it’s a normal part of fandom or an invasion of privacy. A recent poll suggested that most fans thought everyone should just leave the Sherlock crew alone.

For showrunner Steven Moffat, the Setlock movement is no big deal. In a recent interview, he clarified comments by series star Martin Freeman that sounded to many like displeasure at the set snoops.

“Martin just made a very innocuous remark,” Moffat told the Radio Times. “He literally said ‘I don’t love it’. He doesn’t mind. We’re all genuinely—including Martin, including grumpy old me—very appreciative that people love our show so much, we’re thrilled by it in fact.”

Moffat added that Setlock fans are “fantastic keepers of secrets, and incredibly well behaved and polite and sweet and nice,” which sounds like a teeny, tiny exaggeration, since they’re notorious for leaking potential spoilers online.

With Sherlock‘s head honcho clarifying that Setlock is A-OK, we think it’s safe to post these new photos from the set. Benedict Cumberbatch has shown up wearing a Victorian outfit once again, and other photos show a Victorian-looking street scene. Are we in for some kind of historical episode, a hallucination, a dream sequence, or something else entirely? We won’t know for sure until December.

They took down the screen so… #setlock pic.twitter.com/jnKU2DodB3