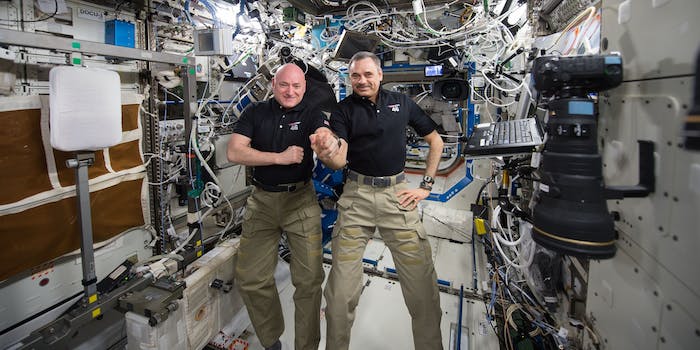 The guinea pig is coming home.

Almost one year ago today, U.S. astronaut Scott Kelly blasted off into space. He went to the International Space Station to carry out some experiments, acting as the guinea pig for one.

Kelly’s identical twin brother, Mark, stayed here on Earth as Scott spent about a year in orbit. Once Scott returns, he will be examined by researchers to see how his body has changed after nearly a year in weightlessness. Russian cosmonaut Mikhail “Misha” Kornienko spent the same amount of time aboard the ISS with Kelly. They launched on March 27, 2015 and will begin their journey home on March 1.

Scott Kelly has amassed a large following on social media, tweeting and posting with the hashtag #YearInSpace. To commemorate his departure, and his contributions to science, NASA will document the whole ride home on their online channel, NASA Television.

The festivities begin Feb. 29 at 3:10pm ET, with the change in command ceremony. Kelly will hand off the command of the ISS to Tim Kopra.

Then at 4:15pm ET on March 1, the ISS will broadcast the farewell hatch coverage.

More coverage will follow through March 4, including an “ask me anything” on Reddit with the NASA scientists and medical doctors on March 4.

We will be periodically updating this post with event coverage, so be sure to check back here to get the scoop. You can see the full lineup of coverage on NASA’s website, as well.