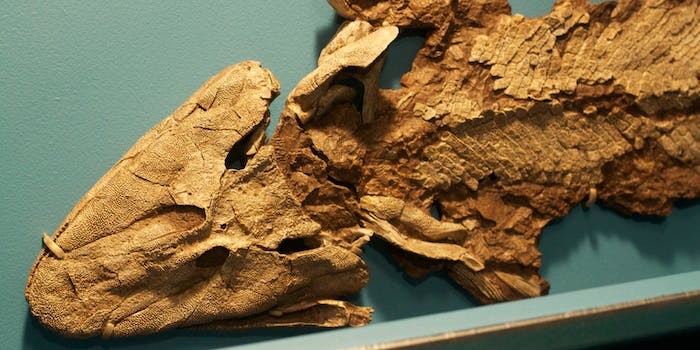 What we can learn about evolution from dinosaur eels

To address one of evolutionary biology’s most fascinating subjects—the transition of early life from the oceans to land—scientists raised a group of fish to survive on land instead of underwater.

The experiment, which relies on a collection of 111 dinosaur eels that can breathe air and walk with their fins, should help the researchers at McGill University better understand the biological changes that resulted in aquatic species adapting to land-based life.

Viewers of Neil deGrasse Tyson’s Fox series Cosmos: A Spacetime Odyssey will remember the story of the Tiktaalik, a genus of fish that scientists consider the prototypical example of the sea-to-land transition. According to the University of Chicago’s page on Tiktaalik roseae, the creature “looks like a cross between the primitive fish it lived amongst and the first four-legged animals” into which members of its genus evolved.

“The existence of tetrapod features in a fish like Tiktaalik is significant, because it marks the earliest appearance of these novel features in the fossil record.”

Emily Standen and her fellow researchers at McGill published the result of their study, which focused on “how developmental plasticity affects the ‘terrestrialization’ of fish,” in March. They raised their 111 dinosaur eels in a customized land-based environment for eight months, providing just a slim layer of water to ensure that the fish would not die.

Standen’s team discovered that “fish raised on land walk with a more effective gait,” and they noticed changes in the physiology of the walking fish that are reminiscent of the evolutionary changes that gave rise to modern land species.

Unfortunately, because dinosaur eels are not related to early land-based life like the Tiktaalik roseae, the experiment was not as precise a recreation of that vital transition as Standen would have hoped. Even so, she says, “It seems quite clear that environmentally induced changes may have facilitated their transition to land.”