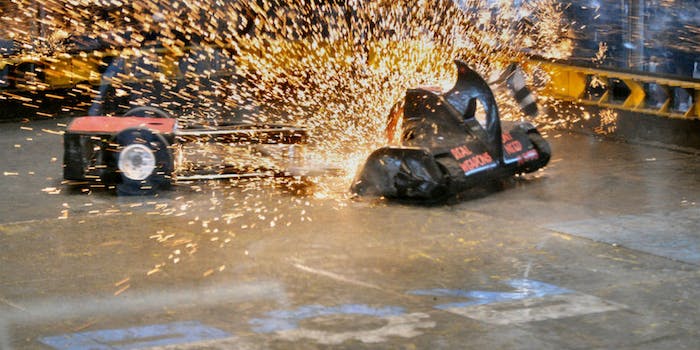 Help this Kickstarter resurrect the sport of robot fighting

Who doesn’t love to learn about mechanical engineering by watching robots beat the ever-living snot out of one another with chainsaws and acetylene torches?

The Robotics Society of America wants to take the gladiatorial robot competition it’s been running for a decade—RoboGames—and bring it online as a professionally produced Web series. They’re aiming to raise $40,000 on Kickstarter for the production.

Perhaps you remember BattleBots, the reality show on Comedy Central where contestants built robots and tossed them into an arena full of hazards like buzzsaws, and then pitted their monstrosities against one another in brutal robot-on-robot combat? Before he was debating Ken Ham about the merits of Creationism, Science Guy Bill Nye was a technical advisor on BattleBots.

The show lasted five seasons, not a bad run for an idea that felt apropos of nothing at the time, though it did herald shows like Mythbusters, which are also about building things and then destroying them in as epic a fashion as possible.

The Robotics Society of America has 10 years of experience with this sort of thing, and they want to expand beyond just chucking two robots into an arena. They want to show a variety of different competitions—they host 54 different events annually—and focus on the engineering involved by way of getting people interested in the science behind it all.

The Kickstarter campaign ends on Nov. 7.