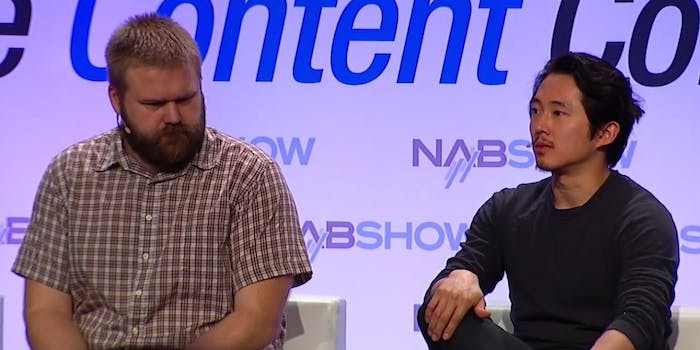 Writers sometimes have to kill their darlings. So do television producers.

Warning: This story contains major spoilers for The Walking Dead show and later editions of the comics.

The unofficial ethos of The Walking Dead, both the comic book and the television show is that no one is safe. Anyone could die, at any time. Including Glenn.

That is one of the takeaways from a recent appearance by Walking Dead creator and executive producer Robert Kirkman and actor Stephen Yeun, who plays Glenn on the AMC television series. The pair appeared Tuesday at the 2015 National Association of Broadcasters Show in Las Vegas. The Wrap reports that Kirkman hinted at “cool stuff” for Glenn in Season 6, and suggested that Glenn might meet his end next season. Yeun acknowledged that it was possible, and that the way Glenn died would be important.

“The way that we make the show—the writers and everybody really want(s) to focus on making things poignant and purposeful and meaningful,” Yeun said, as reported by The Wrap. “So if it were for Glenn to go, then it’s probably going to be awesome.”

The NAB Show posted yesterday on YouTube some edited clips of the Kirkman/Yeun appearance. Kirkman talks about the eccentricities of Walking Dead groupies, and lack of security on the Terminus set, while Yeun discusses the difference between Walking Dead characters that viewers can relate to and characters they stand in awe of.

Fans of the comic book know that The Walking Dead television show takes wide divergences from the series, but that both tend to revolve around the same major plot points. The characters in the comic never encounter cannibalistic survivors at Terminus, for example but they do encounter cannibals between leaving the prison and arriving at Alexandria outside Washington, D.C.

The discovery of Alexandria in the comic is essentially the close of one massive plot arc, the “early survival” stage of the story, and the beginning of a plot arc about rebuilding society, or at least trying to. What seems like a turn that might lead to increased security actually precedes the loss of several, major characters.

Now that our gang of survivors have reached Alexandria in the television show, the stage is set to lose at least one or two series regulars. And fans of the comic know that Glenn’s clock is very much ticking.