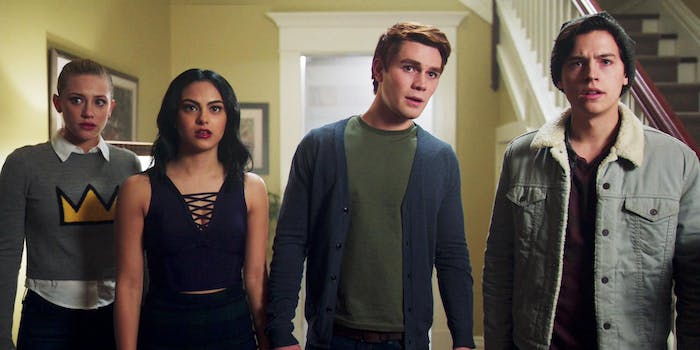 The showrunner posted a mysterious drawing of a monster called 'Sugar Man.'

Riverdale creator Roberto Aguirre-Sacasa has already hinted that the show might add some supernatural elements in season 2. Could that involve a creepypasta-inspired horror story?

Aguirre-Sacasa posted an enigmatic tweet on Wednesday, showing a child’s drawing of two kids with a monstrous figure looming in the background. The red-haired children represent Cheryl and Jason Blossom, while the monster is labeled “Sugar Man.” It looks like they’re standing in front of the Blossom family home.

Lock your doors, #Riverdale, the Sugar Man is coming… pic.twitter.com/WkPSHQnt6N

Sugar Man could be an original character, tying into Riverdale‘s combination of sugary sweetness with a touch of horror. The CW show’s backstory involves a blood-feud over a maple syrup business, after all. But as io9 points out, Sugar Man could also refer to an obscure creepypasta story from Reddit’s r/nosleep forum. The original post describes a monster with a long tongue and a powerful sense of smell, who sniffs his way through houses in search of sugar and candy. Not exactly Slender Man but still creepy enough for Riverdale.

Season 1 blended teen drama with a murder mystery storyline, and season 2 may introduce some weirder material. Sabrina the Teenage Witch exists within the Archie Comics universe, and Roberto Aguirre-Sacasa is the writer behind the zombie apocalypse Afterlife with Archie comics. A sugar-guzzling creepypasta monster would not be a stretch for this show, even if it’s just a local Riverdale urban legend.