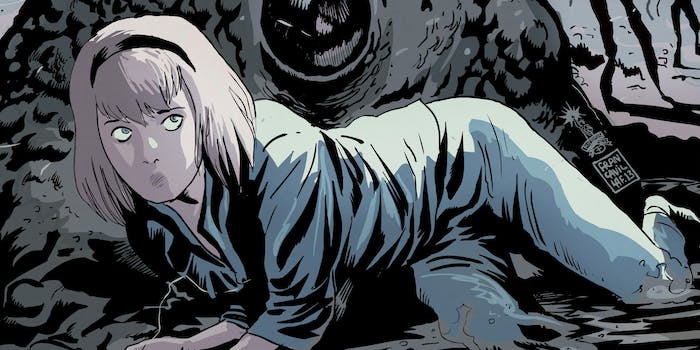 ‘Riverdale’ may bring witchcraft and ‘Lovecraftian horrors’ into the Archie universe

Season 2 may introduce Sabrina the Teenage Witch or even some supernatural elements.

Riverdale adapted the teen dramedy of Archie Comics into a murder mystery soap opera. It doesn’t bear much resemblance to the comics, but it’s deliciously bonkers. And season 2 may go even further, transforming Riverdale into a supernatural drama.

Showrunner Roberto Aguirre-Sacasa discussed the idea in an interview with Entertainment Weekly, referencing his work on the zombie apocalypse comic Afterlife with Archie. “There will definitely be a big genre element to season 2,” he said. “It’s going to make people go, ‘They’re not really doing that, are they?’”

Apparently he considered adapting Archie as a Buffy-style supernatural show, but opted to make a teen soap instead. He explained that it’s easier to introduce supernatural elements later, whereas “once you’re supernatural, it’s going to be hard to go back to non-supernatural.”

Aguirre-Sacasa confirmed a few Afterlife with Archie Easter eggs in Riverdale, but it doesn’t sound like we’re getting a full Afterlife adaptation. However, Sabrina the Teenage Witch may join the show in future seasons. Aguirre-Sacasa has even devised a neat way to introduce magic to the world of Riverdale. The towns of Riverdale and Greendale (Sabrina’s home) are separated by the Sweetwater River, which could act as a barrier between the magical and non-magical worlds. “On the other side of the mythic river, which is sort of like the River Styx, there’s magic and witches and dark Lovecraftian horrors.”

“Lovecraftian horrors” is not something we ever expected to associate with Archie, but Aguirre-Sacasa is clearly a fan.

He added that he hopes Sabrina will arrive in Riverdale “sooner rather than later.” So, she could appear in season 2, or we may have to wait for a spinoff. In more concrete news, the season 1 finale will introduce another Archie character with “a darker origin,” hinting toward the genre shift in season 2.