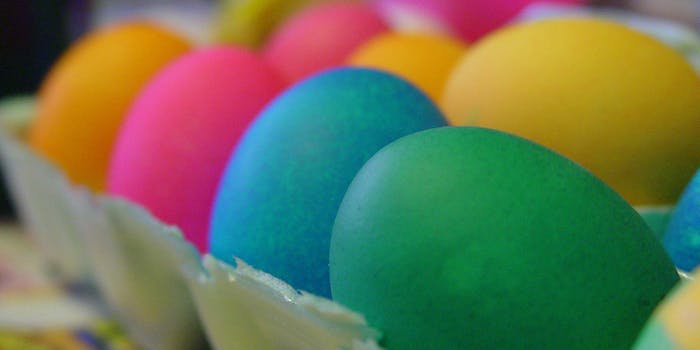 Is this the biggest Easter egg in gaming history?

Dive down RedLynx's rabbit hole. You won't regret it.

In an Internet of three-second cat GIFs and the instant gratifications of Tumblr feeds, it’s hard to recommend an 11-minute video. But sometimes a video comes along that’s so mind bogglingly insane that it requires a person to step away from cute animals and take in some of the magic people can produce. This video game Easter egg is one of those videos, and it’s worth the ride.

Easter eggs in video games are when game developers hide little secrets in hard-to-find places for players to uncover. Usually the Easter eggs are benign, like a photo of a developer and his wife tucked behind the wall of a building no player is really meant to see. Sometimes Easter eggs go way above and beyond.

In Trials Evolution, a game in which a player on a motorcycle must traverse a series of ramps and death traps, players have found probably the most complex Easter egg to date. It seems that the small developer RedLynx has really taken it to the next level, with a dizzying series of clues and codes that had players puzzled.

By studying the game’s textures and music files, fans have been trying to uncover exactly what was hidden inside this game. Eventually fans discovered a hidden code in one of the music tracks, a message in Morse code. That code in turn led players to a website with even more puzzles and riddles. Eventually players uncovered all the riddles and found that they needed to go globetrotting to solve the mystery.

If you thought traversing the world was over the top for a video game Easter egg, it doesn’t even come close to ending there.

Without spoiling the video, things take a remarkable turn into the realm of fairy tales. Although it sounds clickbait-y, everyone who still believes in Disney-like wonder and magic must watch this video to the end. It will leave you stunned, and people will be talking about it for years to come. We won’t say anything more, lest we spoil the fun, but sit back, relax, and try your best to comprehend everything that’s going on.