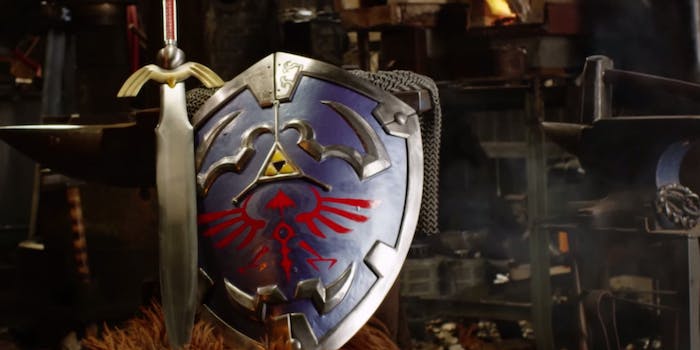 Metal and amber make for an awesome replica.

The master crafters from webseries Man at Arms created a real-life version of the famous Hylian shield that accompanied Link on his adventures in the Legend of Zelda series.

The construction process involves machines used to make armor in the 17th century, alongside plasma cutters used to make the decorative overlays for the shield, and jewelry machines for shaping and buffing the shield adornments made from amber.

The metalsmiths also decided to make a matching and equally iconic Master Sword, just for good measure. The sword doesn’t get much of a pain test, but the Hylian Shield can take a little punishment.

The craftspeople at Baltimore Knife and Sword Co. have produced a collection of different fictional weapons for the Man at Arms YouTube series, including the Sword of Omens from Thundercats, a Dragonborn helmet from The Elder Scrolls V: Skyrim, Sting from Lord of the Rings, and a Klingon Bat’leth from Star Trek.