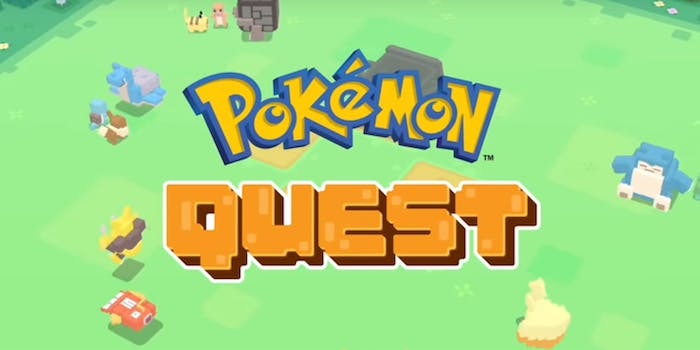 Turns out Porygon was quite the trendsetter.

Nintendo has always had a knack for releasing peculiar games in peculiar ways, and after the galaxy-wide success of the smartphone-based Pokémon Go, it only makes sense that it would want to continue exploring the “free-to-play” genre that dominates app stores. Thus Pokémon Quest was bequeathed to the masses on May 30, a “free-to-start” Pokémon role-playing game on the Nintendo Switch that challenges you to, once again, collect all 151 original creatures roaming the world.

While Pokémon Quest can easily rest on the laurels of its overly familiar premise, the game’s visuals and play style set it apart from the pack, if only slightly. Aping Minecraft’s blocky voxel graphics, every creature, item, and location is rendered in adorably simplistic and colorful blocks. It most definitely works to Pokémon Quest’s advantage, as it’s a simple joy discovering what shapes each Pokémon takes in this new world. As a Pokémon researcher, you’re tasked with defeating waves of wild Pokémon on expeditions, discovering new recipes that will attract new Pokémon to your base camp, and filling out your Pokédex.

Like many free-to-start games, it all operates on an energy system that inevitably requires either patience or wealth. Go out on a handful of expeditions and your energy bar is depleted, forcing you to wait around 30 minutes or pony up more money. There are items to collect or purchase directly from the store, including Pokémon-themed furniture that boosts stats or the rate at which you find larger-recipe ingredients. (OK, maybe I bought a Snorlax couch. Like you wouldn’t.) When you’re not out battling Pokémon with up to three of your own, you’re chilling out at base camp (à la Animal Crossing Pocket Camp), mixing ingredients into a cooking pot, and watching the Pokémon you’ve collected scamper about.

Unlike the unfortunate Harry Potter: Hogwarts Mystery mobile game, which often stopped players in the middle of activities to ask for money (including when you’re literally being choked out by a magical vine), Pokémon Quest doesn’t feel like it’s bashing down your door during every other mission.

Part of this is thanks to the fact that Pokémon Quest’s gameplay is so inoffensive and (dare I say) uninvolved that you can set it to auto, walk away, and as long as your team’s power level is somewhat above the level ranking, you’ll walk away victorious. It’s kind of stunning that this game is debuting on Nintendo Switch, when it’s so much more suited for smartphones—the kind of thing you’d feel better about checking every hour rather than devoting actual focus to. To its credit, the makeup of a Pokémon team can be a chance to strategize, focusing on creatures that attack directly, larger Pokémon that act as damage-absorbing tanks, or Pokémon that have area-of-effect attacks that push back swarms of enemies. There’s also each Pokémon’s stat card, which you can fill with additional power or health charms, further raising the team’s power level. That you can switch charms between any Pokémon before an expedition feels like a godsend, as Pokémon Quest could have easily exploited the player for more money if they disliked a creature’s stats.

This all goes a long way to saying that Pokémon Quest is perfectly innocuous, like most Pokémon games before it, but almost to the point of complete boredom. Pokémon Quest doesn’t do anything explicitly wrong, but thanks to the lack of meaningful involvement from players, this Switch version feels destined to be forgotten, especially when you consider the upcoming Pokemon: Let’s Go, Pikachu! and Let’s Go, Eevee! are releasing this fall.

Some Pokémon games just aren’t for fans like me, and that’s perfectly OK. A parent who grew up on Pokémon Yellow might find Pokémon Quest is the perfect introduction for their kids to the gotta-catch-’em-all phenomenon, especially if long walks around town for Pokémon Go aren’t feasible. I doubt parents will be able to rely on Pokémon Quest for very long, though, as the world’s artificial barriers just scream for a bit more variety, a bit more involvement, a bit more personality in a Pokémon world.

Disclaimer: This review was written based on a download of the game from the Nintendo eShop.