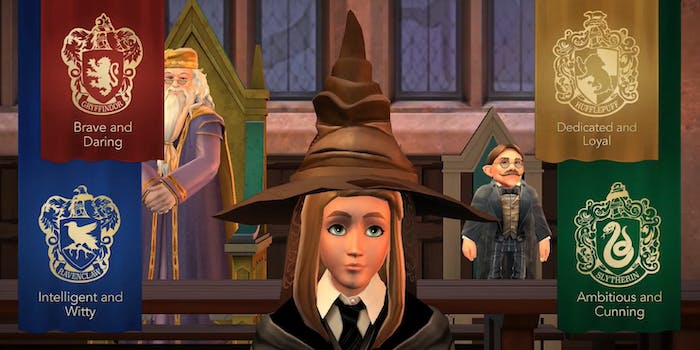 Make friends, duel with magic, and explore Hogwarts in this charming (yet flawed) mobile game

Harry Potter will always have a special place in my heart. Memories of my mom reading The Sorcerer’s Stone to me before bedtime, gasping when we learned Professor Quirrell’s true nature, are as clear as any other cherished childhood moment, and I’ll forever be grateful for that.

Like so many others, I’m always fond of experiences that can evoke that sense of magical nostalgia and wonder, which is why Harry Potter: Hogwarts Mystery is such a breath of fresh air, despite frequently choking on its own hubris.

Released Wednesday for Android and iOS devices, Hogwarts Mystery allows you to live out your own unique wizarding fantasy by becoming a student at the titular school and progressing through the years by learning spells, making friends, and fending off the occasional Devil’s Snare vine. There’s also the mystery of your missing brother, who is accused of losing his mind, embarrassing the school, and running off to join Voldemort, resulting in no small amount of commentary from professors and peers alike.

If there’s one thing Hogwarts Mystery absolutely nails, it’s that same sense of wonder kids (and adults!) felt reading the first few books, when the mysticism of shopping down Diagon Alley and the peer pressure of the Sorting Hat were perfect metaphors for our own first days of school. There’s Ollivander’s shop, where the old wizard himself asks you a few quick questions to determine the perfect wand. There’s the sorting hat ceremony, where you can pick your house (see you cool kids in Ravenclaw), and of course all of it is colored by the fellow first-years you befriend along the way. It really does feel like the beginning of a new journey, and every inch of Hogwarts and its cast of characters feels faithfully translated to mobile. I was initially worried that characters like Snape would be mishandled, especially after actor Alan Rickman’s death, but even the game’s dialogue text feels appropriately sharp and denigrating.

And there’s certainly no shortage of familiar (and new) characters to befriend. Hogwarts Mystery is set seven years before the events of Harry Potter, so cast members include a younger Tonks, a puppy-sized Fang, and a positively gorgeous Bill Weasley doing his best Fabio impression.

There’s a number of systems at work when it comes to actual gameplay. You’ll tap an endless procession of items during class before practicing a basic shape to cast a spell. Friends might challenge you to a game of Gobstones (think wizarding marbles) where you can distract them to gain an edge. Of course, no Hogwarts experience would be complete without occasionally tripping into a magical creature’s deadly grasp. You’ll have to recite more spells to escape. Thankfully, there’s a healthy list of spells, potions, and other challenges to master that make you feel like you’re making some genuine progress.

And that’s where Hogwarts Mystery, for all its production values and warm nostalgia, begins to fall apart. After all, this is a mobile game, and a “free” one at that. Using a system of coins, energy reserves, and gems, players will eventually hit an overly demanding paywall, often at the most inopportune times. After receiving a letter from Professor Snape promising to return the 10 house points I’d lost during potions class, a classmate and I made our way to the potions closet to retrieve ingredients to gain Snape’s favor. The door locked behind us, draping us in darkness. Suddenly, a large mass of Devil’s Snare vines grabbed onto me, forcing me to cast spells and fight it off with my arms and legs by tapping the screen and expending energy. The action ramped up until the vines wrapped around my throat, threatening to permanently end my dreams of wizarding pride—and that’s when the game asked me if I wanted to purchase more energy.

Deflating like Aunt Marge after a run-in with Harry, I resigned myself to waiting until my energy reserves restored themselves, only to discover that it would be a few hours until I could play again without paying. (Players have the option to purchase various sizes of energy, ranging between $1 and $20 installments, much like the popular Kim Kardashian game.) Part of Harry Potter’s allure has always been getting lost in its world, watching creatures flit about, cheering on Quidditch teams, and making lifelong friends in potions class. That such an interruption could happen in the middle of these immersive moments will only hurt Hogwarts Mystery’s resonance with fans.

I think back to the last night my mother and I read The Sorcerer’s Stone together. Our usual policy of one chapter a night was quickly tossed away as the book’s climactic confrontation with Voldemort and Professor Quirrell became apparent. Staying up until the wee hours of the night to finish a story that held us both in such wonder felt like the only appropriate choice. To think of how inhibited that experience could have been if it were subject to the same constant interruptions as Hogwarts Mystery is a depressing thought.

Hogwarts Mystery may be the most promising Harry Potter game since the series’ heyday, with its engaging story and vibrant world, but the one giant issue of how it makes its money detracts much of its charm. I can’t wait to step back into the stone hallways of Hogwarts to revisit new friends and play around with magic, but I’ll be constantly looking over my shoulder for more than just He Who Shall Not Be Named.