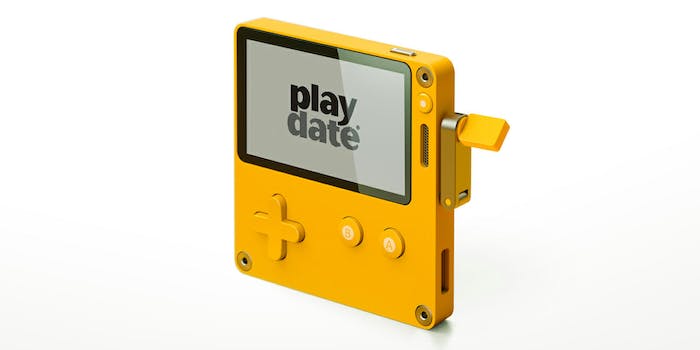 No, the crank isn't used to power the console.

Playdate is an extremely unique gaming console coming in 2020 from utility app developer Panic based out of Portland, Oregon. The console has a lot of quirks going for it, but the most visually striking is the console’s hand crank. Yep, it has a hand crank.

Oh yeah, the crank! No, it doesn't power the device. It's a flip-out rotational controller that puts a fresh spin on fun. Some games use it exclusively, some use it with the d-pad, and some not at all. pic.twitter.com/XYW97nLZKK

Panic made its first foray into the gaming world alongside developer Campo Santo with the hit indie game Firewatch in 2016. Prior to this, Panic was mostly known for making utility applications for developers.

On Wednesday, the studio announced the Playdate, a handheld gaming console that “fits perfectly in a pocket.” The device measures around 3 inches by 3 inches with a 2.7-inch display. The display itself “a black-and-white screen with high reflectivity, a crystal-clear image, and no backlight.“

Just like the original Game Boy, the lack of a backlight will require users to play under some sort of lamp if they are in the dark. The console also has Wi-Fi, Bluetooth, a USB-C port, and a headphone jack.

Panic has said that the console will receive 12 games released in the form of a “season,” with new games coming every week for a few months at no additional cost to the console’s base cost of $149.

About those games. We reached out to some of our favorite people, like @KeitaTakahash, @bfod, @helvetica, @shauninman, and many more.

Here's a peek at one: Crankin's Time Travel Adventure, from Keita. It's fun and funny. pic.twitter.com/0Ibwqr5k3I

Independent gaming consoles—that is, hardware not produced by Microsoft, Sony, or Nintendo—are few and far between. No better example of what not to do with an independently released console exists than the Ouya. The Kickstarter funded console raised over $8.5 million during its crowdsourcing phase in 2012 but failed to see success in the retail market. Only time will tell if the Playdate will be able to break this trend.

Playdate will ship in early 2020, with pre-orders anticipated in late 2019.