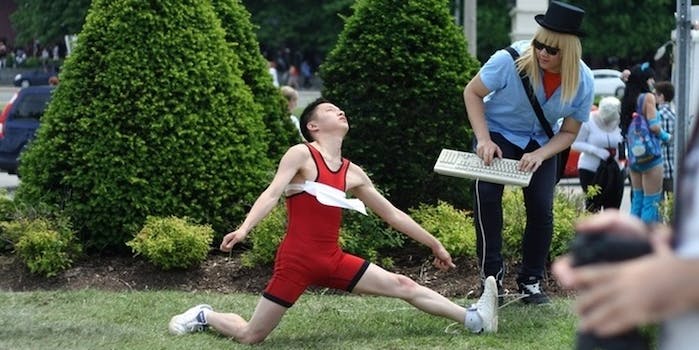 This mystery man is the world’s greatest QWOP cosplayer

He walks the comic con floor with all the gracelessness of the QWOP runner, but who is he?

QWOP, a notoriously difficult online Flash running game, has frustrated and delighted players since it was born in 2008 from the mind of Cut Copy bassist Bennett Foddy. Players control a runner named “QWOP” using the keys in his name, but the little man on the screen moves his body and legs in totally twisted, unhelpful ways. The game, and its star, became a meme in 2010, garnering Foddy’s website 30 million hits.

And one glorious guy has been cosplaying QWOP at cons since at least Comic Con 2011. In some videos, his hair is longer, but I’m pretty sure it’s the same guy judging by his moves and the costume. A GIF of the cosplayer pulling off the disjointed run of the QWOP runner is beloved, and a video from YouTuber ProTekProductions shows him doing an even better version of the run at Anime North Con 2013.

But who is this fantastic, accurate cosplayer? Even though he’s made appearances at numerous cons (Comic Con 2011, Anime North 2012, Anime North 2013) and been covered by Kotaku and other prominent blogs, his identity remains a mystery.

Do you know this QWOP cosplayer? Contact us! We want to be his best friend!