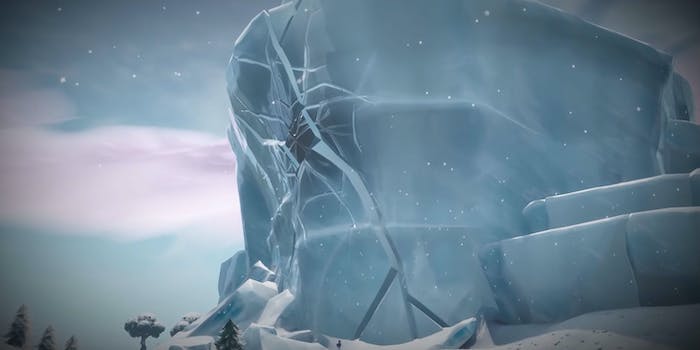 Polar Peak in Fortnite is cracking, and players think a dragon may be beneath the ice

Thar be dragons... or dinosaurs.

The snow biome in Fortnite may not be long for this world. The Polar Peak region has started to form a large crack in its ice as of the 9.10 update, and it’s got players wondering what could be next for the area.

It’s pretty easy to see the cracks as you approach Polar Peak. The cracks started to form after the volcanic eruption at the end of season 8, when one of the volcano’s magma projectiles struck Polar Peak, along with destroying Tilted Towers and Retail Row.

Now it seems strange sounds are emitting from between the cracks at Polar Peaks, along with what looks like air or steam.

Wind/sounds are coming from massive new cracks In polar peak! Something trapped Inside trying to break out? pic.twitter.com/nY3OUSJhhp

The popular consensus is that the volcanic eruption and subsequent impact from flying magma have awakened some sort of dinosaur or dragon buried deep beneath the ice. Judging from the air/steam billowing from the cracks and what sounds like the roar of a giant creature, we’re inclined to believe it. There are some players who claim they see the silhouette of a creature through the ice, but personally, I’ve yet to witness as much, and even players no-clipping their way through the ice don’t seem to see anything.

Are dragons coming to Fortnite?

They’re easy to miss, but Fornite has actually had dragon eggs chilling around the map for some time now. As the snow on the Ice Castle and Polar Peak has continually melted over the course of the past couple seasons, more of its exterior and interior have been discovered. In the Ice Castle’s dungeon, there’s a cell filled with large eggs, so all this could point to a fully fledged dragon being stuck beneath the structure.

Perhaps a mother dragon is about to burst from its icy prison? A late Game of Thrones tie-in? Our next blink-and-you’ll-miss-it event? Only time (and more leaks) will tell. Make sure to catch up with the latest patch news.