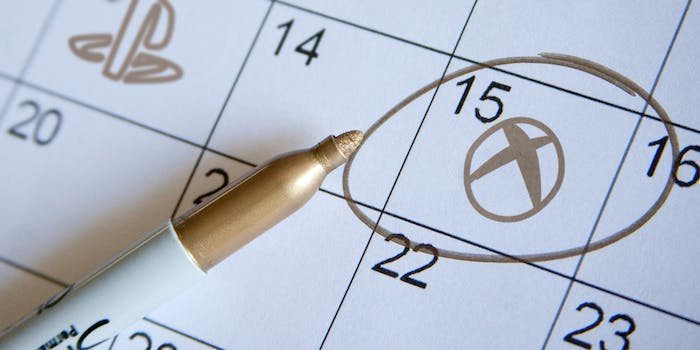 Set your gaming budget with this interactive game release calendar

If you’re tired of not having enough money saved for a game because you’re terrible at following release dates, we have a solution for you.

Software engineer Chris Gregori has released an interactive calendar, Play Date, that allows you to search the game release schedule month-by-month, and to filter your results by platform. It is powered by a plugin called FullCalendar, and draws release information from the user database at community gaming site Giant Bomb. (The calendar is only available on Google Chrome, at present.)

If you only play games on one platform, keeping track of releases isn’t that big of a deal. The more systems you play games on, however, the more your personal game release schedule can become a total mess.

It used to be that major releases were all squeezed between the months of September and December, to feed the holiday feeding frenzy. Publishers have slowly realized the wisdom of stretching these out throughout the year, if for no other reason than not to have all the blockbusters competing with one another. This makes for a year-round focus for gamers on the schedule.

The number of core console releases to keep track of can be dense owing, to the console transition (Xbox 360 and Xbox One, PlayStation 3 and PlayStation 4). If you game on handhelds, you might already be setting up your own release calendars. Play Date will make this easier with a future update that will allow users to export their data to iCal and Google Calendar.