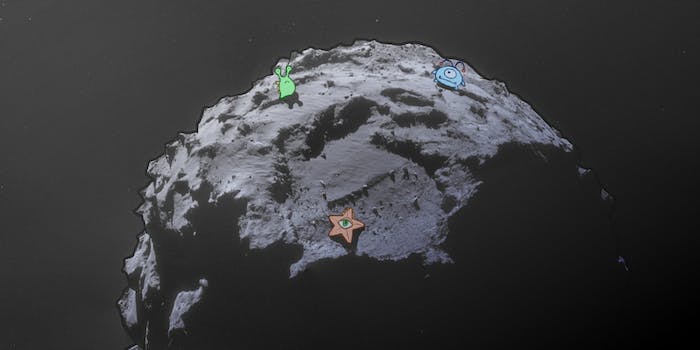 The Philae comet lander may have discovered alien life

Don't get too excited just yet. The findings haven't been verified.

The probe that made history by landing on a comet last year may have just planted another historic milestone. It could be the first part of human civilization to come into contact with alien life.

Two prominent astronomers who have studied the Philae probe’s data aren’t sure whether or not Comet 67P/Churyumov-Gerasimenko contains alien life, but they think it’s likely, given the features of the comet’s surface that Philae identified.

Philae, which is run by the European Space Agency, took the first pictures from the surface of a comet after its Nov. 12, 2014, soft landing on Comet 67P. It has been sending back those photos, along with invaluable scientific readouts, since awakening on June 13 from an unplanned safe-mode hibernation.

When it landed, Philae found a surface rich in organic materials. Professor Chandra Wickramasinghe and Dr. Max Wallis ran computer simulations based on Philae’s findings and determined that the comet probably hosted microorganisms in the liquid regions under its icy crust. These microbes would be similar to the extremophiles that survive at crushing depths and white-hot temperatures near the hydrothermal vents in Earth’s oceans.

The Rosetta spacecraft, which launched Philae and then continued orbiting the comet, also detected what the Guardian called “strange clusters of organic material that resemble viral particles.”

Wickramasinghe and Wallis will present their argument at a scientific conference in Wales this week.