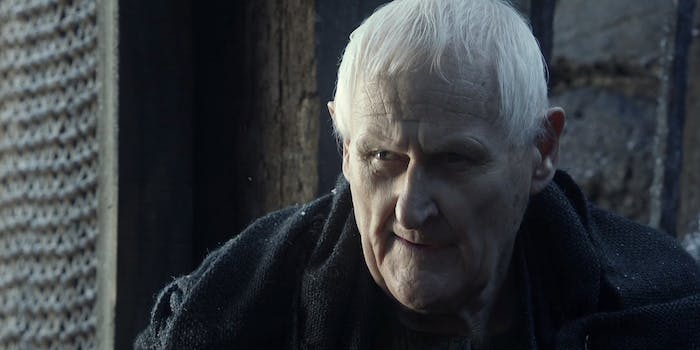 Screengrab via Game of Thrones / HBO

He had an acting career spanning decades.

Peter Vaughan, a longtime British actor whose career has spanned decades but was known to many Game of Thrones fans as Maester Aemon Targaryen, has died at 93.

“[V]ery sadly Peter Vaughan has passed away at approximately 10.30 [GMT] this morning,” Sally Long-Innes, Vaughan’s agent, said in a statement. “He died peacefully with his family around him.”

Born in Shropshire, England in 1923, Vaughan—whose birth name was Peter Ohm—started his career in theater, particularly at the Wolverhampton Repertory, and served in the army in World War II. His movie debut came in 1959, and for the next several decades he would play a variety of characters across film, TV, and radio (but not often the lead) including The Crucible, Terry Gilliam’s Time Bandits and Brazil, The Remains of the Day, Straw Dogs, and a BBC radio adaptation of Lord of the Rings.

As Aemon Targaryen, the blind maester of the Night’s Watch whose wisdom others sought out (Vaughan was partially blind at the time), both Vaughan and the character were was often a welcome presence on Game of Thrones; Maester Aemon died in the show’s fifth season.

Outside of Game of Thrones, Vaughan’s most famous role was playing Harry “Grouty” Grout in the BBC sitcom Porridge, who quickly became a fan favorite after only appearing in three episodes.

“Luck, good wine, and beer,” he said when asked about the secret to his long career back in October. “I just had a damn good time.”

Vaughan’s co-stars and colleagues who’ve worked with them shared their condolences and memories across social media. Some have even used the final customary words when eulogizing a brother of the Night’s Watch, “And now his watch is ended,” to honor him.

Deeply saddened to hear that Peter Vaughan has passed away at 93. A kind and talented man. His watch is ended x pic.twitter.com/jOnusxuZ3N

And now his watch is ended. Lucky to meet him briefly once, a wonderful actor and lovely man. Sleep well, Peter Vaughan. https://t.co/UHdEqgs5E1

Safe journey Mr Vaughan. From Fox to Porridge to Brazil to Game of Thrones. A wonderful actor and a thoroughly decent gentleman x

Absolutely gutted about Peter Vaughan. Even in his old age he refused to sit whilst anyone else was standing. Absolute gentlemen.