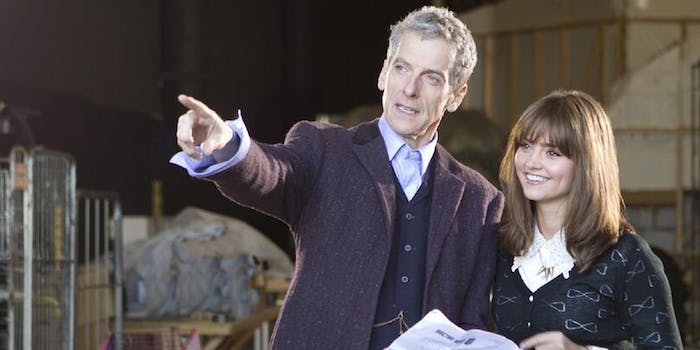 This time, the Doctor is going to act his age.

With the new season of Doctor Who only three weeks away, Peter Capaldi has finally started answering some real questions about his role as the Twelfth Doctor.

His first comments are immediately reassuring: the Twelfth Doctor will definitely not be “flirty.”

“There’ll be no flirting, that’s for sure,” he said to the Sunday Times, discussing the Doctor’s relationship with his current companion, Clara. “It’s not what this Doctor’s concerned with. It’s quite a fun relationship, but no, I did call and say, ‘I want no [flirty] moments’. I think there was a bit of tension with that at first, but I was absolutely adamant.”

Since Capaldi is 56 and his co-star Jenna-Louise Colman is 28, this is probably just as well. Although honestly, this casting just puts a more accurate visual spin on the fact that the Doctor is hundreds of years older than any of his companions.

While the Russell T. Davies’ era of Doctor Who saw considerably more romance between the show’s leads (companion Martha Jones had a crush on the Doctor, while Rose and the Tenth Doctor fell in love), Steven Moffat’s period as showrunner has been a lot more flirty in tone.

This has been rather divisive among the show’s fans, because while the Rose/Doctor romance was enormously popular, the recent uptick in innuendo-laden humor is often interpreted as part of Moffat’s problem with writing female characters. Last season, the Doctor described Clara as “a mystery wrapped in an enigma, squeezed into a skirt that’s just a little bit too tight,” which sounded weird enough coming from the 31-year-old Matt Smith. That kind of dialogue would probably make Peter Capaldi seem like a dirty old man.

In the same interview, Capaldi also hinted that the upcoming season would be a lot darker than in recent years.

“Some situations are more somber and I think there are more rooted dramatic scenes,” he said. “Over the past two or three years, which I’ve loved, there has often been a breathless vigour; we still have that attack, but we have another level of drama, another tone.”

Of course, this is the kind of thing that Doctor Who’s actors and writers say before virtually every season, so we’re going to take it with a grain of salt. Each new Doctor brings a different tone to the series, but “somber” seems somewhat unlikely for a family show where the main characters regularly fight people in plastic robot costumes.