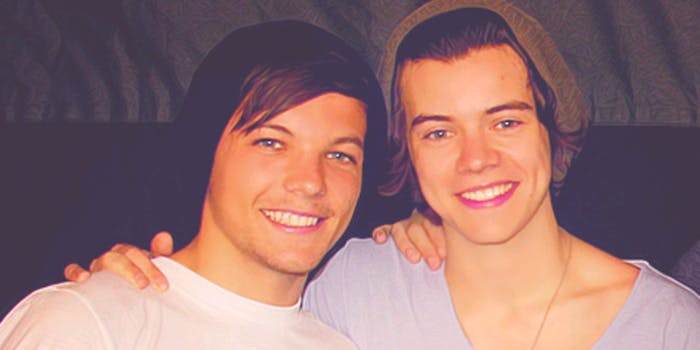 #RIPDavid: Your guide to the latest One Direction gay conspiracy theory

One Direction fans are convinced a man disappeared because he exposed Harry Styles’s big secret. #RIPDavid.

#RIPDavid. A young man cut down in the prime of life (or at least forced to suspend his Twitter account) by One Direction’s dastardly management agency.

Why? Well, it’s all part of a massive conspiracy to keep 1D singers Harry Styles and Louis Tomlinson trapped in the closet, unable to publicly express their true feelings for each other.

Of course, there’s no real evidence to support any of this, but that hasn’t stopped certain sections of 1D fandom freaking out all over Twitter. The disappearance of “David Shomen” is just the latest installment in a never-ending series of 1D-related conspiracy theories.

At this point, you may be wondering why this relatively banal celebrity encounter is such a big deal. To the untrained eye, it’s just a case of some guy seeing Harry Styles in the street. But to a Larry Stylinson fan, this kind of thing takes on a whole new layer of hidden meaning. As one Tumblr user put it, “RED ALERT.”

Most boy bands inspire a certain amount of homoerotic fanfic, but instead of just writing fanfiction about Harry and Louis falling in love, a surprising number of Larry Stylinson shippers believe that the two singers are dating for real. Their relationship is simply being covered up by 1D’s management company, Modest Management, and Tomlinson’s longtime girlfriend Eleanor Calder is a beard who is contracted to accompany him to public appearances.

The only possible explanation for David Shomen’s suspended Twitter account was that he had stumbled upon a secret Larry Stylinson date, and then Modest Management silenced him.

The Larry Stylinson mythos grows every year, partly because fans need more and more reasons to believe that Harry and Louis are still in the closet rather than just being straight.

All of the members of 1D support LGBT rights, one of Harry’s best friends is gay and they are often seen at gay bars together, and Louis’s girlfriend was recently the maid of honor at his mother’s wedding. The simplest explanation is that they are both straight, and that their relationships with women are real. So to counteract the growing evidence against the Modest Management conspiracy theory, Larry Stylinson truthers need to find more and more clues that support their beliefs.

Last year this involved tracking down Eleanor Calder’s family history in an attempt to prove that she had changed her name and was secretly the daughter of a record company exec with a tangential link to 1D’s own label. And now, the latest conspiracy theory fuel is the mysterious disappearance of @dshomen.

The rapid worldwide spread of the #RIPDavid hashtag isn’t just evidence of the power of Larry Stylinson fandom, it’s also proof that most 1D fans are very self-aware. No one seriously thinks that @dshomen is dead, but enough people thought that he was part of some kind of Modest Management cover-up that #RIPDavid started trending. The hashtag is almost a joke in itself, particularly when you factor in the inevitable semi-ironic photomanips based on @dshomen’s profile photo.

Basically, Larry Stylinson believers are beyond parody. A fake #RIPDavid joke tweet (“Gone but never forgotten.”) is virtually indistinguishable from the real thing.

And so, Larry Stylinson fans survive another day in the tumultuous world of 1D fandom. @dshomen’s tweets may have indicated nothing more salacious than the possibility that Harry Styles and Louis Tomlinson were in the same place yesterday, but his suspended account will live on as “evidence” that Modest Management is always watching. And in turn, this proves that Larry Is Real.