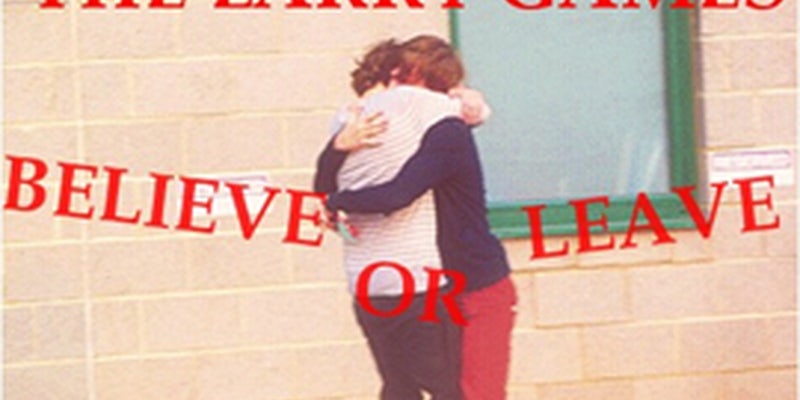 Directioners want a relationship between Louis Tomlinson and Harry Styles so much that they've convinced themselves it already exists—to an extent never before seen in Real Person Fandom.

Many Directioners, the huge fanbase of UK pop group One Direction, believe that the love of the main Real Person Fandom (RPF) pairing, “Larry Stylinson,” aka Louis Tomlinson/Harry Styles, has to really exist in order to be shippable.

They’re so convinced that the pairing is actually a factual, real relationship that they’ve formed elaborate theories about all the ways the band’s management (as well as their girlfriends) are keeping Louis and Harry from going public with their love.

On Monday, 1D fandom was brimming with theories that recently released photos of Louis Tomlinson and his girlfriend were staged, and that one Harry/Louis fan’s report of the two being “cute” at a music festival together was a deliberately constructed lie.

Yesterday, many Stylinson fans earnestly speculated that a forthcoming announcement on the 1D website will reveal that the band members are coming out of the closet.

But none of this is the silly part.

The silly part is how little these newcomers to RPF understand the long and glorious tinhatting tradition of which they are a part.

To understand tinhatting, you first have to understand the subset of fandom devoted to RPF, or Real Person Fiction. RPF is a term that designates fanfic or other fanwork devoted to imaginary scenarios about real people. Because of the tenuous relationship between fandom and mainstream culture, RPF is sometimes viewed as scandalous within fandom circles, but as a non-fandom creative trend, it’s ancient, and as taken for granted as reading In Cold Blood or turning on your TV for an episode of The Tudors or The Kennedys.

The relevant part of this equation, however, is “imaginary.” No matter how well-researched a story based on real life is, it remains fiction. No matter how much you believe your favorite real-life One True Pairing (OTP) are in love, you can’t will that belief into becoming a reality.

Sometimes, that’s an acknowledgment RPF shippers refuse to make. When you insist on reading real-life events as supporting your ship preferences, you often have to explain why reality isn’t playing by your rules. This almost always leads to conspiracy theories, and inevitably, across all fandoms, these conspiracy theories always look the same.

Though there have been many tinhats for ships over the years, the most notorious are those within the Lord of the Rings RPS fandom, or LOTRPS.

In the heyday of the filming of the Lord of the Rings trilogy, LOTRPS shippers—people who shipped the actors with each other—were abundant throughout the fandom. But some DomLijah (Elijah Wood/Dominic Monaghan) shippers actually believed that not only were the actors actually gay, but they were being actively prevented by New Line management from coming out publicly about their love.

The group originated on gay gossip site DataLounge, where they were eventually driven out by DL regulars who were uncomfortable with the level of conspiracy theorizing and delusional thinking occurring on their forum, Prancing Pony. Undaunted, a new community, DataLounge Rejects, was formed, and its ringleader, a fan named MsAllegro, aka MsA, became notorious for her cultish devotion to the idea that Monaghan and Wood were in a closeted relationship which they were trying desperately to keep from the public view.

“Maybe [other, invasive fans] assume that the “rumors” couldn’t possibly be true, therefore it’s all just a big joke, ha ha. They don’t realize that what they’ve done is put the guys [Wood and Monaghan] in a position of having to confront the rumors publicly way before they were ready to do so. …Granted that the guys themselves have fanned the flames, and if they hadn’t, I certainly wouldn’t have been talking about it all this time. But people are running with this much further than what the guys have done…IF they want to come out publicly, they will. If they want to maintain the glass closet, they will as well. But people have to realize that just as there are degrees to being out, there are degrees to talking about this, and going beyond what the guys themselves are doing is incredibly rude and insensitive.”

As for the actors, Wood found himself routinely confronted by DomLijah shippers, while Monaghan reportedly informed MsAllegro that she was “crazy.”

In 2003-2004 fandom, tinhatting was considered a minority and extremist side of fan activity. The website Sanity Please was “created by group of fans who got tired of the campaign of deliberate misinformation and deceit perpetrated by certain elements of the Lord of the Rings fandom, and decided to inject reason, objectivity and facts into the debate…We just want to provide a more accurate counterpoint to the lies, heavily edited accounts, and wild speculation being foisted upon fans as ‘fact.’”

The debunkery included a summary of the DomLijah “conspiracy theory,” as well as a roundup of evidentiary claims the tinhatters had made in attempts to prove the theory.

RPF fan anatsuno is the founder of DL_anon, one of several communities and websites set up to keep tabs on the hijinks of the LOTR tinhatters. She recalls to the Daily Dot, “[The DomLijah tinhatters] spread the rumors they believed in, pointing to the DomLijah threads they themselves had fed as proof that the story was out there. Some went so far as to troll and bully newbies in the fandom, bombarding them with proof, arguments, pictures and conspiracies until they could ‘recruit’ them to their tinhat ranks. ‘Bullying’ is perhaps too strong? But there was a little of the cultist in their behavior.”

Other notable fandoms for tinhat conspiracies are Daniel Radcliffe/Emma Watson, the Ohmiya pairing in the ARASHI fandom, and Kradam (American Idol’s Kris Allen and Adam Lambert).

But none of this compares to the vastly overwhelming mentality within the One Direction fandom that their preferred ship of choice must be real. This is a complete generational shift in terms of RPF fandom, which has long relied on the disclaimer, used as a protection from accusations of slander, that RPF is not real.  In 1D fandom, there is no room for people who ship fictional versions of the “characters” of the band members.

One anonymous One Direction fan, unused to this view of RPF shipping, told The Daily Dot how uncomfortable it made her feel. “This is the kind of shit that used to identify you as a crazy tinhatter, but now it seems to be the majority view of the fandom. The baseline is that they’re together until proven otherwise. The backlash against Harry/Louis tinhatters doesn’t come from other Harry/Louis shippers, the way it would in other RPF fandoms; it comes from Louis/Eleanor shippers because tinhatting and shipping are essentially the same thing in this fandom. There’s no real space in fandom for people who ship Harry/Louis in the fictional sense.”

The discrepancy has led to ship wars that revolve around proving your own ship, or disproving the existence of the enemy ship. “If someone ships Larry after this,” one Elounor fan said after the music festival report, “I feel sorry for them.”

Anatsuno told The Dot that she understood why the trend across fandoms existed: “Creativity and obsessive detailed analysis are both involved in fannishness. When they get applied to real people, the stories that result are an understandable narrative when you add wishful thinking to the mix. It’s not so hard to believe that artists might be closeted. So many are. Humans are good at teasing out meaning from the tiniest of things and projecting patterns where there are none. So it all contributes to a set of narratives that resonate across many different fandoms where similar situations exist.”

Not all directioners believe that Stylinson is real. One fan estimates that the number is low, only “a couple thousand,” compared to the number of people who would be alienated by members of a boyband coming out. And Fanlore notes that “Fans calling themselves tinhats is usually a marker that they are not real tinhats, as they do not take their shipping that seriously.”

But that’s sometimes hard to remember—especially in a fandom where the only thing that isn’t taken seriously is the possibility that none of this is real.