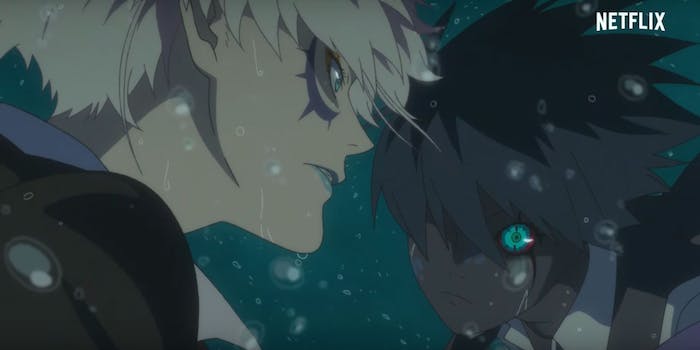 Netflix’s ‘B: The Beginning’ packs anime action, but the story never gels

This beautifully animated show suffers from a confusing narrative.

Netflix’s decision to get more involved in the anime industry came into full swing this March when it dropped four brand-new full series into fans’ laps. One of those series was B: The Beginning, a 12-episode action thriller from Production IG.

B: The Beginning tells two parallel stories, both taking place in the fictional European archipelago nation of Cremona. In one, detective Keith Flick returns to the force after years in isolation to find his sister’s murderer, who he believes may be connected to a series of killings by a man the local police have named Killer B. In the other, a young man named Koku uses his superpowers to fight a group of genetically altered humans called “Reggies” in a search for his lost childhood friend. It’s a weird mish-mash of two completely disparate stories, held together with spit and glue.

Although director Kazuto Nakazawa has been working in anime for over 25 years, he’s never directed a full series himself until now. In addition to creating the original concept, he also designed the characters and directed both the story and the action. His talents shine through most in the series’ action sequences, and with at least one per episode, there’s a lot to enjoy. The twin concepts create opportunities for a wide variety of types of action, from police chases to swordfights to tense standoffs. Each sequence is beautifully composed, as vibrant as they are violent and gory.

Even in the quieter moments, Nakazawa excels at the visuals—much of the characters’ personalities are portrayed through body language and facial expressions. Koku looks and acts like a fairly typical teenage anime protagonist, but middle-aged, bearded Keith stands apart from the norm. There are some questionable design choices: It’s hard to fathom why the Reggies wear clown makeup, including one that looks like a cross between Beetlejuice and Jared Leto’s Joker, and most of the series takes place in dark warehouses and basements, ignoring the beauty of Cremona. Still, all-in-all, B: The Beginning is a visual treat.

As the series wears on, however, a picture starts to form about just why Nakazawa has never directed his own series. The plot beats careen back and forth between hoary cliches and wild contrivances, never finding that happy middle ground where things actually make sense. Some of these wild contrivances are a lot of fun, like one of the aforementioned clowns reciting poetry while skateboarding off the roof of a skyscraper. Others, such as the main villain’s motivation, are just eye-roll-inducing. When they’re not embroiled in intense action sequences, the characters spend a lot of time talking at each other, revealing the plot through lengthy exposition dumps. This is not helped by the clunky script, written by a total newcomer who has only scripted one episode of anime ever.

That lack of experience is felt most in the character writing. Between fight scenes, Reggies make long impassioned speeches and Keith has lengthy conversations with his best friend. The Reggies’ monologuing delivers exactly what one would expect from this sort of anime: declarations of their personal philosophy, debates about how to achieve their goals, and so on. Things drag most when Keith talks; his conversations give the impression that the audience is supposed to be very impressed with his intelligence, but his personality otherwise just isn’t very interesting. Very few of the rest of cast have much to say and mostly serve as vehicles to drive the action.

The exception to the weak character writing is Lily Hoshina, a rookie cop and one of the common links between Koku and Keith. She lights the screen whenever she’s around, and her ebullience and charming lack of sense bring out the humanity of the dour protagonists. She’s a sort of comic relief, allowing Keith and Koku to act as the straight men, and her absence is keenly felt when she’s not around. B: The Beginning has an unpleasant tendency to treat its female characters mainly as motivators and plot devices for the men around them, starting with a classic “women in refrigerators” situation and never really letting up.

In the end, the two plot threads never gel. A few shared characters connect them in a vague sort of way, but it feels like they were pasted together instead of properly interwoven. Koku’s story is classic superhero fare, with evil organizations and characters raging against fate. They deliver grand emotional speeches mid-battle and reminisce about their shared past. Keith’s story resembles Sherlock more than anything else, including torrents of onscreen text to help viewers connect to the eccentric genius’ thought process. The way the story shifts back and forth between the two creates a sense of tonal whiplash that never goes away. It becomes increasingly difficult to keep track of what is going on in which story and to get fully invested in either one. They would be better served as two separate stories taking place in a shared universe, allowing some breathing room to fully explore each plot and build its characters. As it is, B: The Beginning offers an experience that is beautiful to look at but ultimately trite.