They need your help to embark on the adventure of a lifetime.

What happens when four nerds decide to go on a road trip across Europe and Asia in one car? That’s what Kristina Manente, Sora Reyes, Scott Joseph, and Cara McGee plan to find out when they take part in the Mongol Rally this July.

The annual Mongol Rally is a 10,000 mile journey run by The Adventurists, a group that organizes a number of travel events. The rally starts in England and ends in Russia. Teams can take any route to get to Russia and only have to follow three rules: They “can only take a farcically small vehicle,” they must be completely on their own, and they have to raise £1,000 for charity.

These four nerds have appropriately named their team the Nerdventurists  and settled on a tentative route they plan to take this summer. There’s no time limit, so it will certainly be as much about the journey as the destination. That’s what drew many of them to the rally in the first place. Manente, founder of the Baker Street Babes podcast, discovered the rally a few years ago while craving an exciting new experience.

“Sadly the past two years it just didn’t work out in terms of timing or being able to get a team together. This year the timing worked. It’s the week after [San Diego Comic-Con] and I have a fairly flexible schedule with my work, which is mostly freelance. I just needed a team and thankfully I found three fantastic people to join me,” she told the Daily Dot. 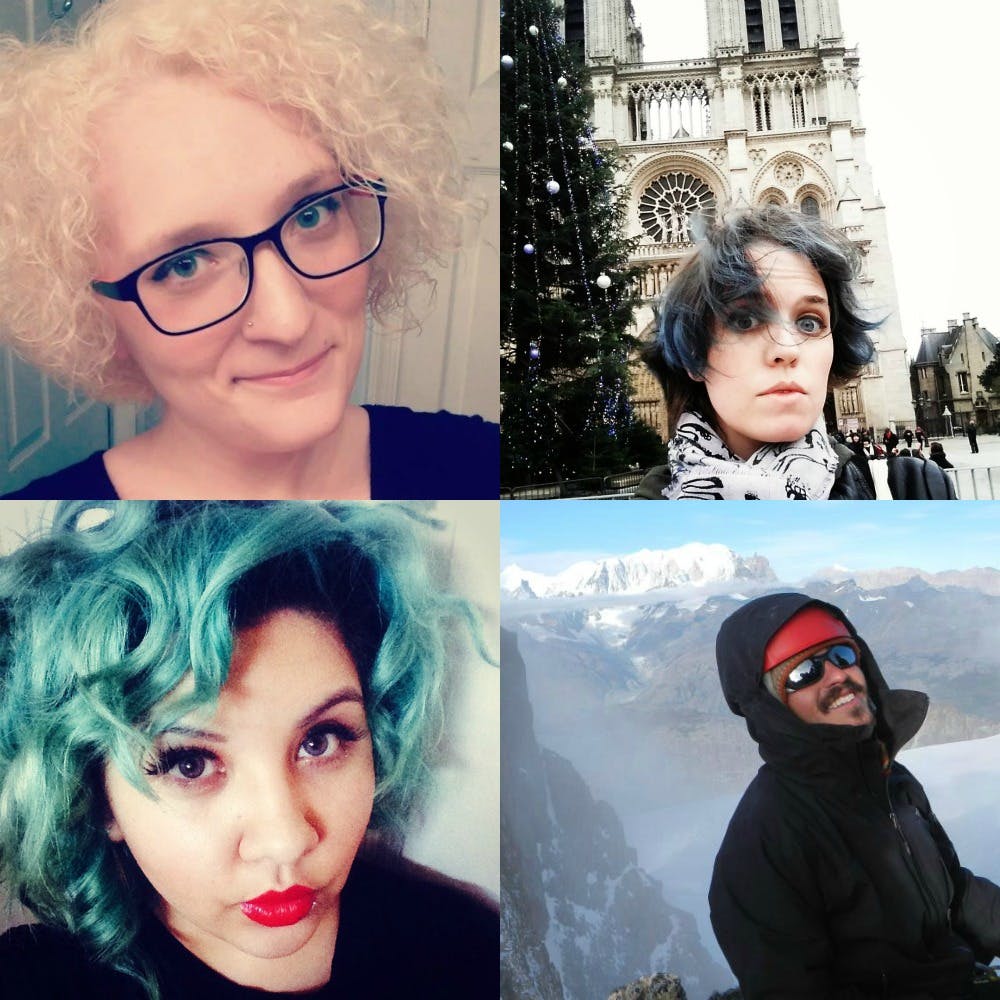 Adventure was a draw for Reyes and Joseph as well.

“It’s something that is surely going to be seared into my memory for the rest of my life, and it’s going to be one hell of a story to tell people one day. Also, there is nothing quite like being stuck in a car for weeks on end with your friends to bring you all closer,” Reyes said.

The group’s tagline is “3 Girls & their Mustache. 1 car. 10,000 miles.” The “mustache” is Joseph, the only man in the group and the only teammate who has not met the others in person. Joseph, who runs the travel blog Travelstache, saw the Mongol Rally as a way to take his adventures to a new level. He found the three women through the Adventurists’ Facebook page.

“I saw a post saying they were looking for a fourth, so I just wrote that I was interested. Then filled out an application they created, had a Skype interview, and I was in! I actually won’t be meeting them until we meet in London the week before it begins,” he said.

While it might be a challenge at first driving in a car with people he’s never met before, Joseph said he believes he’ll get along with everyone. That doesn’t mean the group won’t face challenges beyond being in the same car for weeks. Logistics, driving a manual car, and more are highlighted by the team members as some potential hurdles. For Reyes, her biggest challenge is tied to one of the charities they are supporting.

“I have Crohn’s disease which causes inflammation in the digestive tract, this in turn causes a series of symptoms that make life and traveling absolute hell. It makes eating on the road a bit complicated and there is the ever lingering fear of a flare up happening,” she told the Daily Dot. “As it happens one of my teammates [Cara McGee] also suffers from this disease, I think between the two of us we’ll make it through ok.” 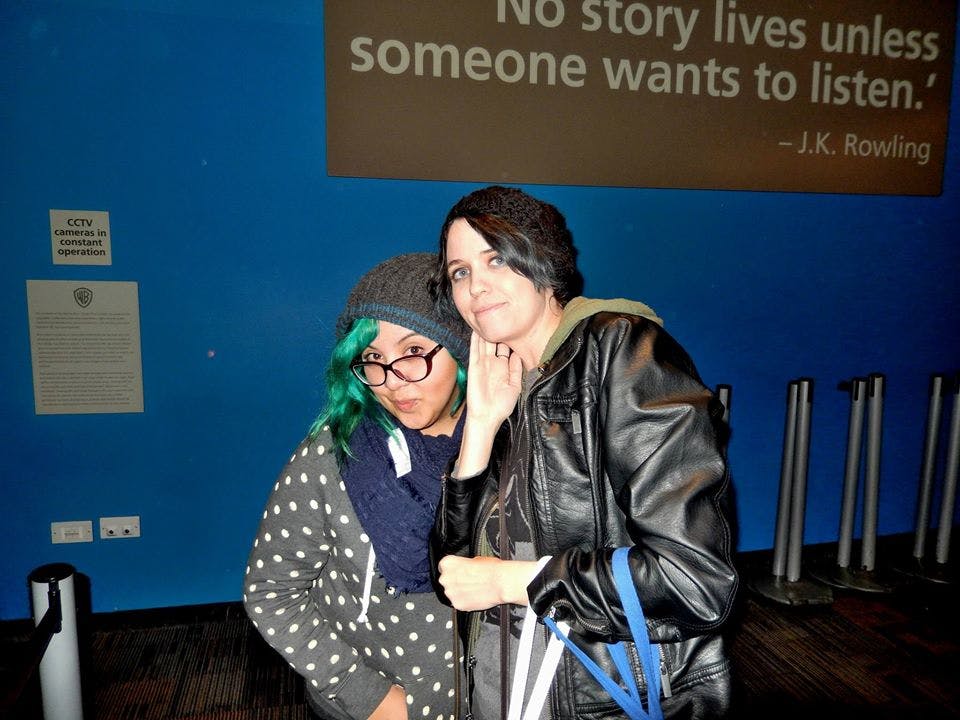 While the team is required to raise money for the Adventurists’ Cool Earth charity, which works to halt the destruction of the rainforest, the team is also supporting the Crohn’s and Colitis Foundation. The foundation is working to find a cure for the gastrointestinal diseases.

“It’s very near and dear to me since I suffer from Crohn’s. There are lists of things I have to avoid eating, which can make eating on the road, let alone in other countries where I might not understand what food it is they’re giving me, quite challenging,” Reyes said. “But I’m one who’s always up for a challenge, and I would love to show others living with Crohn’s that having this chronic disease doesn’t limit you from, and do pardon the cliche, living life to the fullest.”

To raise money for the charities and to cover trip costs, the Nerdventurists are fundraising a number of ways. Their current GoFundMe campaign states that they need around $10,000 for their trip and breaks down their various costs. The campaign has already raised $2,860 of the $5,000 goal. Anyone who donates $25 or more can even pick a book quote for the team to write on their car. They are also running a FUNraiser, which is a crowdfunding platform started by a former Mongol Rally team.

“What you do is set up ‘challenges’ that people can specifically donate to. So we’ve got one where you can choose a song and based on how much you donate, that’s how long we’ll listen to it on repeat. We’ve also got side charity missions where we’re going to try and raise money to donate books to a Kazakhstan orphanage and a 24-hour bake off where we’ll donate what we bake to local homeless shelters. So it’s a bit more interactive and there’s options where we can send you a postcard from on the road and such,” Manente said.

Fifty percent of donations to the FUNraiser will go to the charities and the other half will go towards team costs. They are also raising money through sponsorships and are currently sponsored by Go Coco Coconut Water and Nudie Snacks, Alluvian Aquatic Botanical Soap, and product sponsor WaterNlife Lifestraw Go.

The FUNraiser challenges and donor book quotes are just two ways the group will be showing their nerdiness on the trip. Reyes the car itself will be their statement and painted with a variety of things. Manente said they’ll include quotes and drawings of their favorite shows and video games.

The Nerdventurists plan to share and record their experiences during their trip as well. Some of their options include social media like Twitter, Instagram, and Facebook, recording audio or video diaries, and updating their websites. Manente said they will be setting up a YouTube account and possibly a Vine. Since she works in the audio field, she will be recording as much of the trip as possible too. They may even shoot a documentary.

No matter how they decide to document their travels, there’s no doubt that these four nerds are going to be experiencing the adventure of a lifetime. 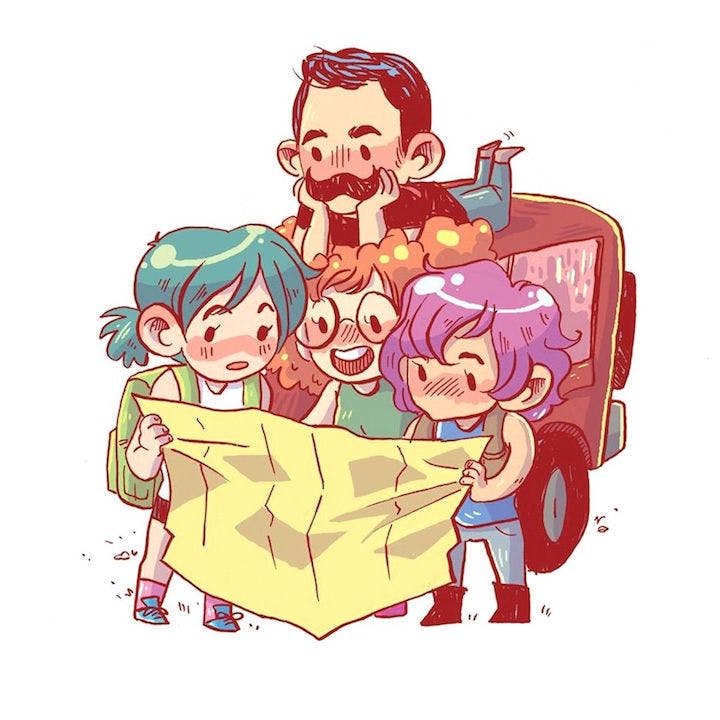 “We’re a bunch of nerds who are leaving the Netflix marathons, the conventions, the midnight movie premieres, Twitter, Tumblr, Facebook and the Internet all behind. We’re going to go find out what its like to take a road trip where our faces aren’t glued to a screen and our only entertainment is the company of each other and the hopefully awesome people we’ll meet. It’s going to be unforgettable, and I can’t wait,” Reyes said.