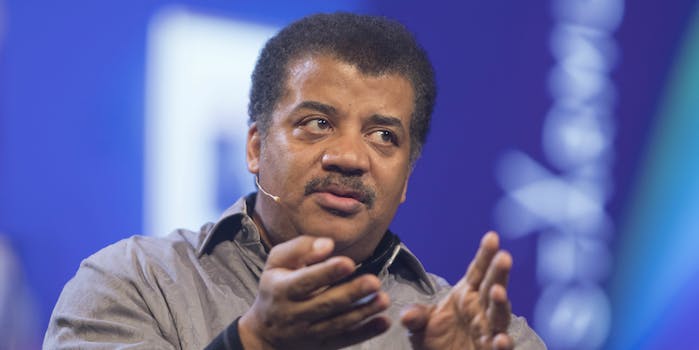 What a touching speech.

As far as the internet is concerned, astrophysicist Neil deGrasse Tyson has been having a weird time lately, getting ragged on here and there for some of his not-so-cosmic brain thoughts. But Tyson may be turning some folks back to his side after an emotional reading he did at New York Comic Con.

At a NYCC panel, Tyson read a birthday letter he wrote to NASA, which just celebrated its 60th anniversary on Oct. 4. Tyson’s own birthday is Oct. 5th, close enough for the scientist to consider himself and the organization birthday buddies.

Tyson recounted his youth watching astronauts like Buzz Aldrin land on the moon, but he also talked about how he felt conflicted watching NASA recruit military pilots at a time when war was becoming less and less popular. Tyson then turned to how racial discrimination led to then-vice president Lyndon B. Johnson in 1963 issuing a directive to hire more Black engineers.

“In 1964, you and I had not yet turned 6 when I saw picketers outside the newly built apartment complex of our choice in the Riverdale section of the Bronx,” Tyson read. “They were protesting to prevent Negro families, mine included, from moving there. I was glad their effort failed. These buildings were called, perhaps prophetically, the Skyview Apartments, on whose roof 22 stories over the Bronx I would later train my telescope on the universe.”

Tyson continued his exploration of how NASA’s discriminatory conduct was a symptom of America’s outlook on race, not the cause of it.

“I knew this, but you should nonetheless know that among my colleagues, I’m the only one in my generation who became an astrophysicist in spite of your achievements in space rather than because of them,” Tyson said.

Tyson wrapped things up with a more positive and emotional outlook on the organization. We’re not spoiling the good bits. You’ll have to watch for yourself.

“These days, you look much more like America,” Tyson said. “From your senior level managers to your most decorated astronauts, congratulations, you now belong to the entire American citizenry.”

Quite frankly, as someone who’s more used to Tyson rambling than sounding eloquent, the speech plucked an honest heartstring in me. It’s clear that racism and the cutthroat politics surrounding NASA have influenced Tyson’s life in immense ways, but even after confronting the organization’s long list of shortcomings, the astrophysicist still found a sense of beauty and wonder in the overall mission of space exploration. It’s powerful stuff, and it’s definitely worth checking out in full in the video above.

NASA, per usual, has been hard at work developing a tiny helicopter meant to fly to Mars and test the atmosphere. They’re also working to develop a nuclear reactor that could change how fast and easily humans travel through space.