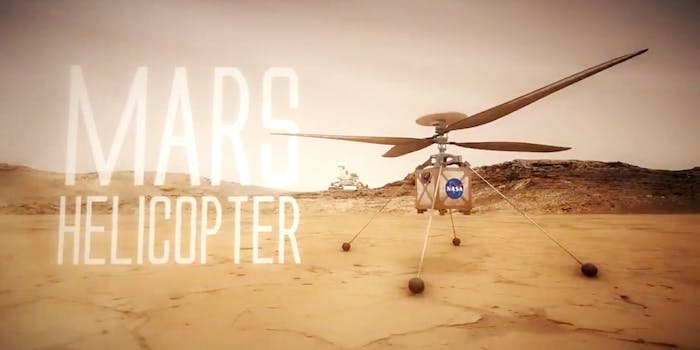 NASA announces a tiny helicopter will travel to Mars in 2020

The helicopter could uncover new, never-before-seen aspects of Mars.

NASA’s next rover will carry the first helicopter ever to fly over the surface of another world, a press release from the space agency said on Friday.

The Mars Helicopter—a small, autonomous rotorcraft—will travel with the agency’s Mars 2020 rover mission in July 2020, in hopes to “demonstrate the viability and potential of heavier-than-air vehicles on the Red Planet.”

We’re sending a helicopter to Mars! Traveling onboard our #Mars2020 rover, this #Marscopter will test our capabilities for controlled flight in the thin atmosphere of the Red Planet and could pave the way for future uses across the solar system: https://t.co/uZFyRmUTgh pic.twitter.com/XlCP9xERub

#BREAKING @NASA news! Our next rover to Mars will carry the first helicopter ever to fly over the surface of another world. #Mars2020 #MarsCopter https://t.co/HyeuMu7Cqn pic.twitter.com/9LpFlFGfxK

The helicopter is the result of four years of testing and redesigning a standard helicopter to shrink it down to an object that weighs a little less than four pounds. Its fuselage is about the size of a softball, and its twin, counter-rotating blades will bite into the thin Martian atmosphere at almost 3,000 rpm, which is about 10 times the rate of a normal helicopter on Earth. The helicopter also contains solar cells to charge its lithium-ion batteries and a heating mechanism.

“The altitude record for a helicopter flying here on Earth is about 40,000 feet,” Mimi Aung, Mars Helicopter project manager at JPL, said in the press release. “The atmosphere of Mars is only 1 percent that of Earth, so when our helicopter is on the Martian surface, it’s already at the Earth equivalent of 100,000 feet up.”

Once the helicopter is transported to Mars by way of the rover, it will begin flying around the planet on its own. The full 30-day flight test campaign will include up to five flights of incrementally farther flight distances.

While the helicopter has been deemed a high-risk, high-reward operation, NASA employees say that if it fails, it will not impact the 2020 mission. But if it does work, helicopters could have a future as low-flying scouts and aerial vehicles to access locations not reachable by ground travel.

Autonomous 1.8 kg mini-drone will fly in Mars atmosphere in two years. When successful, #Marscopter will expand dramatically opportunities for remote sensing of bodies in the solar system having a gas environment. https://t.co/fYTpurRqSf

“NASA has a proud history of firsts,” NASA Administrator Jim Bridenstine said. “The idea of a helicopter flying the skies of another planet is thrilling. The Mars Helicopter holds much promise for our future science, discovery, and exploration missions to Mars.”