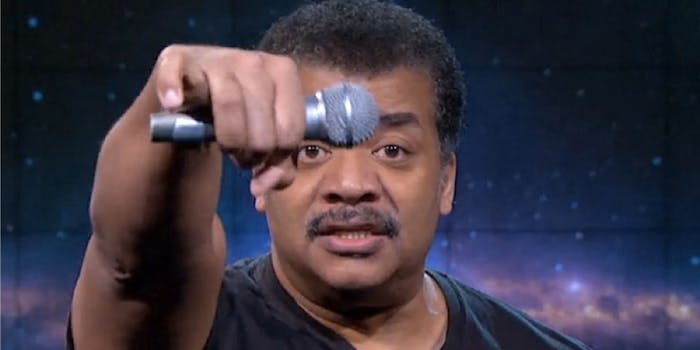 Neil deGrasse Tyson is having a bad month on Twitter

Neil deGrasse Tyson is having a pretty rough year on Twitter so far. America’s most famous astrophysicist was, until fairly recently, beloved as the apparent heir to Carl Sagan. Fans seemed to see him as an avatar of science itself, cheering him on as he used Twitter to challenge regressive policies, rigorously question religion, and correct common misconceptions. It seems people lost patience when Tyson started applying his “well, actually” schtick to movies and TV, and among Twitter jokesters, his name has come to stand in for pedantry and overcorrection.

Bad Physics in #GameOfThrones: Pulling a dragon out of a lake? Chains need to be straight, and not curve over hill and dale. pic.twitter.com/VIJlIuDz3L

In the first month of 2018 alone, there have been a dozen good viral tweets skewering Tyson’s tendency to correct even the most trivial ephemera. His new image as exhausting schoolmaster seems to have replaced his old science hero persona. It’s a bummer for NDT but a treat for anyone who likes jokes. Or anyone who’s still irrationally bitter over the whole Pluto-not-being-a-planet thing.

The Tyson jokes started in January with a tweet starring a mom who didn’t know who Neil deGrasse Tyson was. Or what Hidden Figures was. This wasn’t exactly about Tyson’s Twitter persona, but it was still damn funny.

For the record: It is tight that Tyson, a Black man, is the most famous scientist right now. No one would be mocking him if he weren’t a hugely popular, successful role model. To make fun of his tone is to acknowledge that everyone (well, except Yassir Lester’s mom) knows who he is and what he sounds like. The tweets aren’t malicious—they’re more a reflection of disappointment in Tyson’s transition from Science God to Trivia Know-It-All.

That being said, here are some popular tweets making fun of his tone:

DOG 1: hey u know how sometimes ur human has a ball
DOG 2: ya
DOG 1: sometimes mine throws the ball, but then magically it’s back in his hand!
DOG 2: omg
DOG 1: I know
NEIL DEGRASSE DOG: actually

[extremely Degrasse Tyson voice] water can not have a shape, unless it is ice, the movie should be called "Ice Movie"

Upcoming actor: "My first movie is a hit!! I'm gonna become a star!!!"

Neil Degrasse Tyson: "Uhhh actually a star is born from gravitational instability within a molecular cloud, caused by regions of higher density – often triggered by compression of clouds by radiation from ma"

Here’s the joke in its purest form. It doesn’t matter what you’re about to say, you’re wrong, for some reason.

Neil DeGrasse Tyson: (puts his finger on my lips)
No.

Once the Tyson joke trend had become a slowly bubbling meme, Tyson walked right into it. He described his compulsion to set everyone straight as a “mic drop” and got hit with some very funny “actually …” responses.

actually it’s gravity that makes the mic drop not you neil https://t.co/O46PCC4Vg6

Actually Neil, what you're referring to as "mic drop" is actually a "mic pull," as the centrifugal force of the Earth's rotation creates a gravitational pull that draws the mic closer to its center rather than objectively "down" in a euclidean sense.

*extremely Neil deGrasse Tyson voice* Well, actually, what’s happening here is that people love to see science explained to their creationist, climate-change-denying political opponents, but they are less happy to see their favorite science-fictional entertainments criticized. We’re all fairweather Tyson fans in a sense. When he’s on our side, he’s great. When he’s ruining Gravity, we can’t wait for the bell to ring so we can be dismissed from class.

That’s not to say that Tyson doesn’t have his defenders. After all, millions of people still follow him on Twitter. And some of them even find his nitpicking endearing.

But that's his charm

Why tf do people get so pissy when Neil deGrasse Tyson goes “hey that science thing in the movie you like? Here’s how it actually works” like he’s not shitting on the movie he’s just using popular culture as a pathway to teach u about science that’s what educators do

Whichever side you’re on, I hope we all learned something here today.