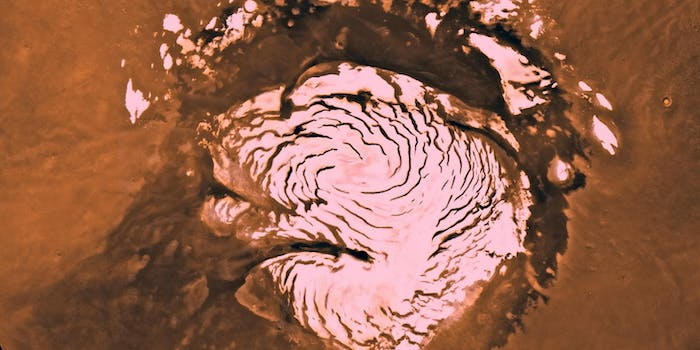 A large body of water is under the Martian surface, scientists say

For the first time ever, scientists believe they’ve discovered a significant body of liquid water on Mars. The European Space Agency‘s Mars Express orbiter detected what appears to be an underwater lake at the planet’s south pole.

If you’re currently asking yourself, “Wait, didn’t they already find water on Mars?” then you’re not wrong. The Martian water news cycle is pretty active, thanks to multiple discoveries of ice deposits on the surface and frozen vapor in the atmosphere. Liquid water, on the other hand, is a much bigger deal. NASA found plausible evidence of liquid water in 2015, inspiring inevitable speculation about the red planet being a habitable world. After that, the discovery of a liquid lake is groundbreaking news.

Detected via ground-penetrating radar, the lake is thought to be around 20 kilometres (12 miles) wide. The depth is harder to gauge, but ESA researchers estimate that it’s at least one metre (39 inches) deep, buried beneath 1.5 kilometres (0.8 miles) of ice and dust. This radar image shows us what the researchers believe is down there:

While the Martian landscape is covered in signs of water from the distant past, the planet’s climate is now far too cold for liquid water to exist on the surface. These days, the planet is—by human standards, anyway—nhospitably cold and dry. Until now, scientists had only confirmed significant amounts of water in the form of ice, primarily located at the poles.

Since sub-glacial lakes like Lake Vostok exist on Earth, it was always possible that Mars’s ice caps hid liquid water beneath the surface. It may not necessarily be warmer down there, but the pressure of the glacier above, plus the possibility of salt in the water , would lower the water’s melting point. There’s a good chance that similar lakes exist elsewhere, waiting to be found through similar techniques.

Of course, the big question now is whether this lake or others like it is home to microbial life. Some life does exist under similar conditions on Earth, but scientists are hesitant to make any guesses without further information. For now, researchers will continue to investigate this lake and search for water elsewhere on Mars.