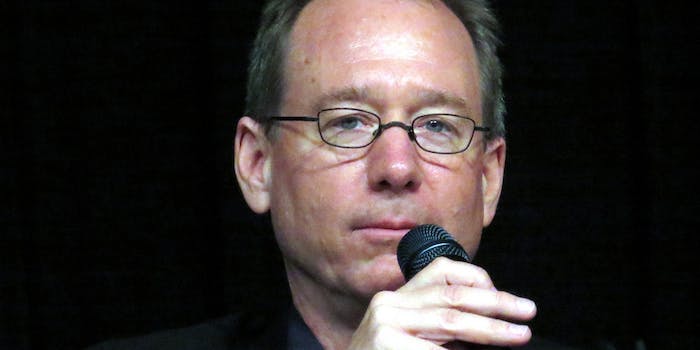 As the MST3K Kickstarter nears its initial goal, some fans have pressing questions about the cast.

While most fans of Mystery Science Theater 3000 are lining up to celebrate the cult series’ epic Kickstarter campaign, a few skeptics in the mix are drawing battle lines along the MST3K fandom’s age-old debate: Joel or Mike?

Thankfully, the founding father of bad movie riffs has laid to rest the idea that it’s a two-sided contest.

The campaign to #bringbackMST3K is steadily drawing near its goal. But astute fans noticed, as we did, that the show’s creator and first host, Joel Hodgson, was staying mum on whether other MST3K alumni, including the show’s second host Mike Nelson, would be returning for the new series. That issue has quickly become a sticking point for fans who aren’t sure they want to support MST3K without more of the old guard around.

On Thursday, addressing this and a number of other questions in an update, Hodgson finally tackled the debate between “Team Joel” and “Team Mike”:

When we first imagined Mystery Science Theater 3000 back in 1988, my hope was to launch a show that, in success, could be as enduring as Saturday Night Live. We had a simple format that could evolve over time, with each new generation of actors and writers finding their own take on the basic concept.

If MST3K hadn’t gotten canceled fifteen years ago, it’s possible we could have had 4 or 5 hosts by now, and it would be just like Doctor Who: even if you had “your Doctor,” you’d still be able to appreciate the different flavors that each new Host or Mad or robot added to the show. It’s part of what makes a show like Doctor Who or SNL last. I’m a Tom Baker fan myself, and no one is funnier than Dan Aykroyd. (To me.)

The problem is that MST3K got canceled after just two hosts, and instead of becoming a proud tradition, some audiences started to see it as a competition between “Team Joel” and “Team Mike.” I think that if MST3K had lasted long enough to have a third host, this wouldn’t have happened. It makes me sad that it did.

It’s not a question of “Team Joel” versus “Team Mike,” but rather a question of why more hosts haven’t crawled aboard the Satellite of Love.

MST3K spawned a whole cultural practice known as “riffing,” along with its modern-day movie-mocking successor Rifftrax. But for die-hard fans, or “MSTies,” a riff is only as good as the guy doing the riffing, which is why the longevity of the series has been overshadowed by the “Joel or Mike” divide.

Hodgson left the show unexpectedly due to creative differences halfway through its fifth season—incidentally in one of its most popular episodes, the Joe Don Baker film Mitchell—and was immediately replaced with Nelson, who had served as the show’s head writer for several seasons up to that point. Nelson’s fans supported him through the rest of the show’s run and onto the Internet, where he and several of his fellow MST3K alumni launched Rifftrax.

Most MST3K fans seem to have a preference for either Joel or Mike. For their part, Hodgson and Nelson have mostly stayed neutral and silent on the subject. But Hodgson clearly has a vision, and that vision is to spread the joy of being an MST3K host far and wide.

Clearly, a much better question than “Joel or Mike?” is: Who’s next?

Photo via littlebiglens/Flickr (CC BY ND 2.0)