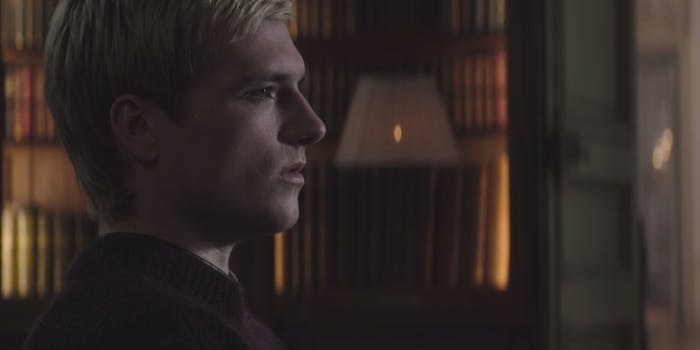 Monday's Hunger Games scavenger hunt has given us a new scene with Peeta and Snow.

Lionsgate has shared some deleted scenes from The Hunger Games: Mockingjay-Part 1, although as ever, the marketing plan was far more complicated than just downloading a video.

The first two deleted scenes were posted this weekend, one featuring Katniss and Haymitch, and another showing Katniss having makeup incompetently applied by inexpert stylists from District 13. So far, so typical. Both were minor scenes, and you could kind of see why they’d been relegated to online extras.

Then on Monday, the Hunger Games Twitter account sent fans on a scavenger hunt to find the next scene, beginning with a coded message hidden in an address from President Snow. After a few hours of fans furiously hashtagging #UnlockMockingjay, the clip was revealed to be a scene between Peeta and President Snow, which would have given the movie a very different tone if it had been left in the final cut.

In Mockingjay-Part 1 we only see Peeta via TV interviews broadcast from the Capitol, meaning the audience is left to guess what’s really going on—just like Katniss, who spends most of the movie worrying about what they’re doing to Peeta between the broadcasts. As it is, we barely know what’s going on until right at the end of the movie, where it’s revealed that Peeta has spent weeks being tortured and brainwashed by the President’s employees. This scene between Peeta and President Snow tells us too much about their relationship dynamic, which would have removed some of the tension from Peeta’s kidnap storyline.

In the Huffington Post, Hunger Games star Jennifer Lawrence explained, “The big dramatic question of ‘Mockingjay – Part 1’ is will we get Peeta back? Is Peeta okay? To see Peeta alive, looking pretty well and being brought into a nice place for an interview feels like it was letting a little air out of the bag. It gave away too much. So sort of for the combination of those reasons, we let it go.”