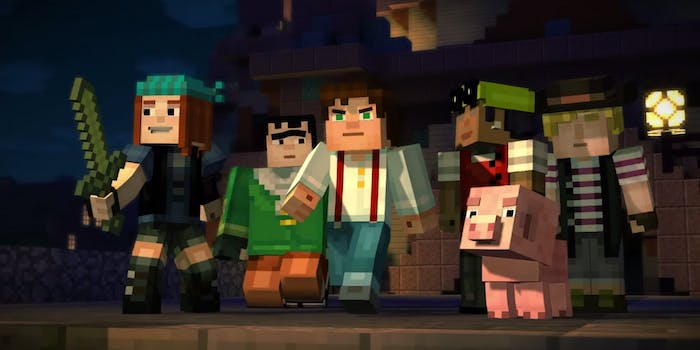 Telltale Games made a name for itself developing episodic adventure games based on comics like The Walking Dead and Fables.  So when it announced a plan late last year to make a game based off of Minecraft, a lot of people wondered what that might look like.

Well, now we our first peek.

This weekend at Minecon 2015 in London, Telltale Games revealed the first trailer for Minecraft: Story Mode, the studio’s latest episodic adventure. The developer handled The Walking Dead, Fables, and Game of Thrones with aplomb because those rich narrative worlds lend themselves perfectly to the style of adventure games that Telltale is known for. Minecraft, on the other hand, is a game about players creating their own stories, following no script and no formula.

The new Minecraft: Story Mode trailer reveals Patton Oswalt in the game’s lead role. It also appears that game is accurately recreating all the familiar elements from Minecraft: crafting blocks, swords, zombies, Creepers, Nether portals, etc. This first trailer also made us think about The Lego Movie, and how deftly it wove narrative into a world that is also inherently about the stories we create.

No release date beyond “soon” has been given for Minecraft: Story Mode. It’s set to appear on almost every popular platform: Android, iOS, PC, PlayStation 3, PlayStation 4, Xbox 360, and Xbox One.