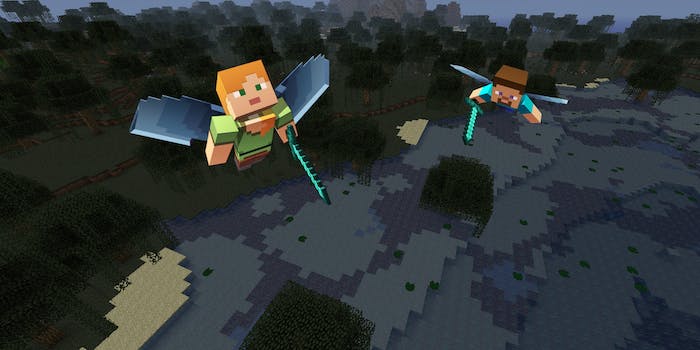 The latest Minecraft update just made combat much harder

You may think of Minecraft as a cute game where kids build things, but it’s also a harrowing fantasy adventure where death lurks around every corner.

Minecraft developer Mojang today released update 1.9, or the Combat Update, for the original PC version of the game. It adds, among other things, the ability to craft and use shields; the ability to wield two weapons at once; tipped arrows, including a Spectral arrow that highlights enemies; special attacks for swords and axes; and a cool-down delay for attacks. These new features will dramatically change the way players fight in Minecraft.

Update 1.9 also expands The End, the alternate dimension in which Minecraft players fight the game’s first boss, the Ender Dragon. A larger End should mean a greater opportunity to discover and explore the rare End cities. The Combat update also added Shulker enemies that disguise themselves as regular blocks in End cities.

People with a casual awareness of Minecraft may be more likely to associate the game with Creative mode, in which players have instant access to all the different types of blocks in the game and can therefore build whatever they like, whenever they want. In Adventure mode, though, Minecraft players have to find or construct different types of blocks or elements in order to build structures.

Various hazards make this task difficult: burning to death in lava, drowning when water floods a cave, falling from great heights, and the wrath of several deadly mobs. In Adventure mode, swords, bows, armor, magic potions, and enchanted weapons and gear are necessities.

Combat at the Hard difficulty setting was harrowing enough before Update 1.9. With the Combat Update, rather than your being able to throw attacks liberally without thinking too much about their timing, you’ll notice a delay between sword swipes. The inclusion of shields made dual wielding a necessity, so now Minecraft players can try to tip the balance of more difficult fights by either blocking attacks with shields or going all-out with a pair of swords or axes.

The Combat Update also adds the ability to combine potions and arrows to create tipped arrows that can deliver the same harmful or beneficial effects as the base potion. Shooting members of a mob with a poison arrow will slowly reduce their health, while shooting yourself with an arrow of regeneration will slowly increase yours.

Update 1.9 is live for the PC version of the game. There’s typically a delay between PC and console/mobile updates, so it’s not yet available for platforms like Xbox One or iOS and Android devices.

Microsoft did not respond to a request for comment.