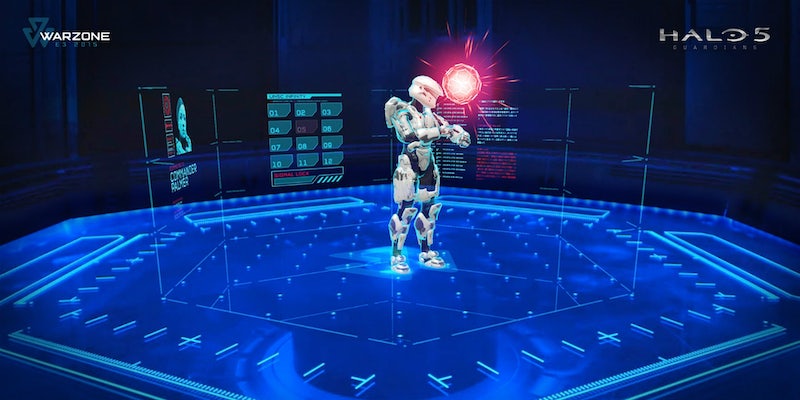 An augmented reality briefing prepares us for war.

The hologram of Spartan Commander Palmer hovered over the hexagonal table in the middle of the military briefing room, displaying the battlefield where I’d be killing other Spartans.

I had been marched into a room that looked like something out of Aliens with a group of people ready to try Microsoft’s Halo 5 E3 experience. There was a tall rack of HoloLens units in the middle. Everyone had been scanned prior to walking in with a device to measure our eye width so we could be matched with appropriately set HoloLens units.

I sat forward as someone in a white lab coat placed the HoloLens over my head. I could see blue text projected onto the wall in front of me, but I couldn’t tell you what it said because a moment later I was told to stand up and “follow the waypoints.”

A diamond-shaped, Halo-style waypoint floated in the air at the entrance to a hallway. Each waypoint vanished as I walked through it, replaced by another. They led me into a briefing room where a hologram of the UNSC Infinity, home base for the Spartan heroes of Halo 5: Guardians, rotated over the middle of the hexagonal table. 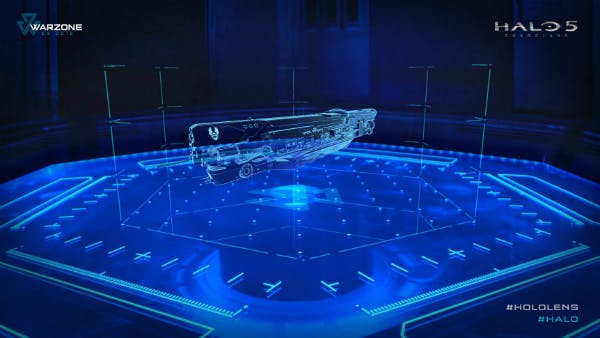 Standing in the briefing room of the UNSC Infinity.

The six of us were being prepped for a match of Warzone mode in Halo 5. I was already a little familiar with the game, having played a match at a showcase following Microsoft’s unveiling of Warzone at its press event on Monday.

Warzone mixes player-versus-player combat with player-versus-environment combat. Two teams of 12 Spartan super-soldiers compete to earn points by seizing control over five different bases on the map. Points can be scored by killing each other and by killing the Covenant and Forerunner officers and troops that invade the map at regular intervals.

The match on Monday night had only taken eight minutes to complete before my Blue team triumphed, but the game had lasted long enough for me to learn the map layout. So when the hologram of the UNSC Infinity was replaced with a hologram of Spartan Commander Palmer, who introduced a hologram of the Warzone map I was about to play in again, I recognized all the waypoints and enemy locations I saw on Monday night. The hologram was a perfect recreation. 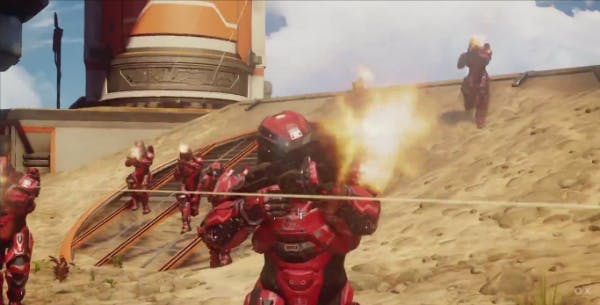 The only issue I had with HoloLens was the need to tilt my head down to see the holograms floating over the briefing room table. Normally I would have more or less been facing forward and tilting my eyes to look down. The HoloLens window wasn’t tall enough to allow that. It was like being denied some peripheral vision, and it wasn’t comfortable.

It also wasn’t a big deal to adjust to, as holograms of Covenant Hunter heavy infantry and Forerunner Phaeton hovercraft units appeared one after the other over the table. I walked around the room to look at the holograms from multiple angles, just to confirm they were 3D images viewable from any position around the table. They were.

The HoloLens unit was easy to put on and take off, thanks to a dial on the back of the unit that tightened or loosened the fit. Taking the HoloLens on and off rapidly, as one jumps between an augmented reality briefing and a Halo 5 multiplayer match on the Xbox One console feels like a perfectly realistic option for gamers.

It is also probably going to be a very expensive option. Microsoft needs to announce a price before I take the idea of mixing augmented reality with my console gaming seriously, as a consumer. But I am sold on the concept.

Microsoft’s AR Minecraft demo at its Xbox E3 briefing Monday morning may have been a choreographed television production, but you saw what the technology looks like to the person behind the goggles. If a similar experience can be expected for consumers, that’s exciting as hell. Augmented reality, like virtual reality, is really real, and it’s here.