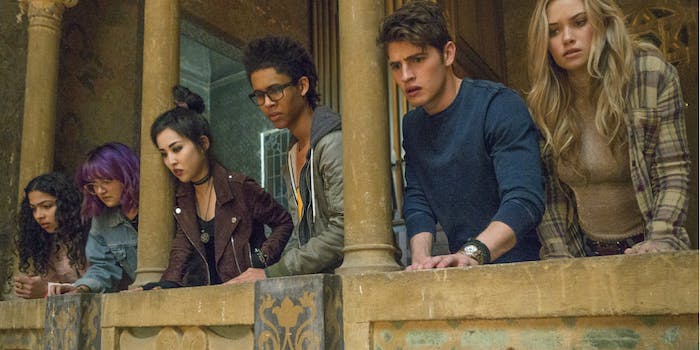 With all of the highs and lows of a teenage superhero drama.

Marvel’s Runaways, Hulu’s first foray into superhero adaptations, arrives on the scene amid a crowded comic lineup across the television realm. But it manages to shine as it juggles a superhero show and a teen drama worthy of its beloved source material with many of the highs and lows of both.

At times it’s easy to forget you’re watching a Marvel show, and I mean that in the best way possible. In the first four episodes made available to critics, there are hints of the super, supernatural, and scientific elements. As the show establishes itself, though, it (initially, at least) leans far more on the characters and less on the idea that their world is filled with superheroes.

Although Runaways exists within the Marvel Cinematic Universe, it more or less plays out within its own bubble—and, save for a few instances, operates similarly to Brian K. Vaughan and Adrian Alphona’s 18-issue original run. It doesn’t allude to the Avengers’ Battle of New York like many other shows have. It takes place in Los Angeles, far from the bustling home of Spider-Man, Tony Stark, Doctor Strange, and Netflix’s Defenders. While the MCU often emphasizes its interconnected and expansive world, Runaways’ relative isolation might even be a relief for viewers who don’t normally keep up with superhero shows.

Unlike many of those shows and films, Runaways already comes with a full ensemble that needs room to fill their own world. By the end of the first episode, you’re introduced to six teenagers and five sets of parents—that’s 16 characters—and while some characters are nailed down right away, others take an episode or two for the show to figure out. It’s a hell of a task, especially when fleshing out the parents, who were always rather one-dimensional in the comics as the story always stayed with the teens.

The teens grew up a lot closer than their comic counterparts—their families are connected via Pride, a supervillain organization disguised as a charity. But the sudden death of Nico Minoru’s sister Amy (who doesn’t exist in the comics) sticks a wedge into their bond, and it drives Nico (Lyrica Okano) and her parents apart. It offers a more intriguing dynamic on both sides of the equation because there is real hurt involved when Alex Wilder (Rhenzy Feliz), the brains of the operation, attempts to get the gang back together. We learn the Hernandezes—called the Hayes in the comics—were killed years before the show starts, so Molly (Allegra Acosta) grows up with Gert Yorkes (Ariela Barer) and her parents instead. When she starts to experience her newfound and energy-draining super-strength, it’s even more of a shock because not only is it exhilarating and terrifying, she has no idea if her parents had anything to do with it. (Molly is a mutant in the comics, but because 20th Century Fox has exclusive screen rights to mutants with its X-Men license, it’s not clear how Marvel will attribute her powers.)

Karolina Dean’s mom heads the Church of Gibborim instead of being an actor while her dad is shuffled out of Pride, and the secret that Karolina (Virginia Gardner) keeps—unbeknownst to her—is masked with a special bracelet. Giving more depth to Chase Stein (Gregg Sulkin), it’s he, not his parents, who came up with the idea and name for his eventual signature weapon.

Inversely, many of the parents tolerate each other only because they have to as part of Pride. That’s largely helped by the second episode, which chronicles the events of the first episode from the parents’ perspective. You begin to wonder how the Pride has managed to work together for this long without killing each other, but some of them have have their own wounds to bear. A couple of the parents aren’t as fleshed out as others by the end of episode 4, including James Marsters as Chase’s tortured sociopathic and abusive father, Victor.

At one point, Alex, who senses the palpable dread his parents have about their upcoming Pride meeting, has to remind them that it’s a charity organization and not the mob—but maybe he’s not so far off with the comparison. They harbor secrets and whispers within their own ranks, some that could potentially have insurmountable consequences if they were found out. And even as the Pride attempts to cover its tracks with the police in its pocket, they can’t quite trust each other.

On the non-superhero front, Runaways sets up the kind of teen drama that showrunners Josh Schwartz (The O.C., Gossip Girl) and Stephanie Savage (Gossip Girl) excel at portraying on-screen. The Runaways each have their own constantly changing identities, but as they fumble through the day at their private high school it feels like something is missing. It’s satisfying when they do come together, and though all of their parents are evil (in a complicated way) doesn’t mean they end up ignoring all of the baggage they bring to the table. The emotional evolution of some of these characters feels real, and their powers and abilities are just part of the equation.

Some of the characters do unfortunately fall into familiar and problematic territory. Gert, an unabashed feminist (albeit a flawed one) intent on taking down the patriarchy, is called a “social justice warrior” as an insult and has it used against her. One character passes out at a party and is nearly raped before being saved by another, which got cheers at the NYCC premiere last month but left me feeling somewhat uneasy. It felt like the scene was a setup for the male character’s growth and lazy writing, and subsequent episodes—in which he withholds that information to “protect” her—does little to quell that suspicion. Other characters’ reactions to those events are a textbook examples of rape culture that leaves a bad taste in the wake of everything that’s emerged in the past month. Some of the supporting characters in the Runaways’ lives aren’t as well developed, leaving them to be caricatures of high school stereotypes, though you get the impression they might not stick around for too long.

The cold open of the pilot makes it appear that a group of Latino men are catcalling and harassing a woman before subtitles reveal that they were trying to save her from cult members, more than one woman of color dies, while another seems to be (so far, at least) a plot device more so than a character.

But when Runaways is on, it nails it.

Some of the interactions and revelations come practically straight from the page. Old Lace, the genetically engineered dinosaur that Gert can control with her mind, is far better executed than Inhumans‘ supernatural giant dog Lockjaw (though that is an admittedly low bar for a CGI superhero pet). There’s something thrilling about each of the characters discovering their own powers and abilities, and one fight made me positively squee. Despite the changes, it’s an adaptation that cherishes its source material with enough morsels and explainers to catch new fans up.

The first three episodes of Marvel’s Runaways launch on Hulu on Tuesday, Nov. 21. Subsequent episodes will be released every Tuesday.