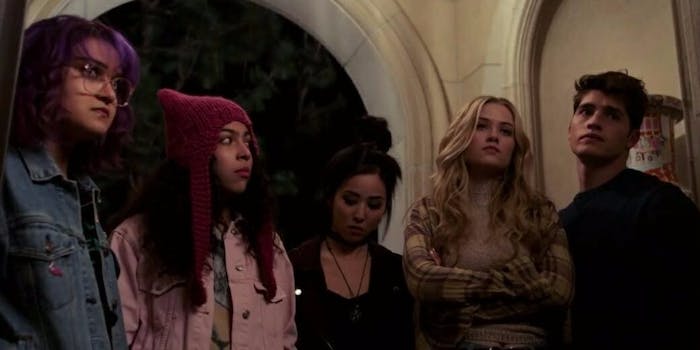 Warning: This review is spoiler-free.

Marvel and Hulu previewed Runaways for thousands of fans at New York Comic Con, and if the first episode is any indication, it’s going to be a completely different kind of superhero show.

We can look toward the characters themselves to catch a glimpse of that. With the exception of Spider-Man: Homecoming, Marvel’s properties have been almost completely devoid of young heroes. We’ve seen heroes learn and grow throughout their own series and movies, of course, but having your heroes be teenagers—who are in the midst of trying to figure out who they are on top of the whole “super powers” thing—allows you to explore the kinds of stories you can’t tell with most of your other superheroes. And although there are hints of the super abilities, advanced technology, and loyal companions we’ll get to see much more of later on, the pilot stays largely in the grounded real world of Los Angeles.

Based off Brian K. Vaughan and Adrian Alphona’s original run, Runaways focuses on six teenagers who discover that their parents are actually part of a secret supervillain organization called the Pride, making the fight when they team up to defeat them deeply personal. But it’s also very much a high school drama. The world that these teenagers inhabit feels lived in and already much more expansive than the comics did—something you can credit toward the medium—even though we’re just starting to dive into the show.

While some are more obvious than others, everyone’s wearing their own mask.

Alex (Rhenzy Feliz) has isolated himself from all of his friends. Popular jock Chase (Gregg Sulkin) is smart and ingenuitive, but the fear of a cold and unforgiving father is enough for him to avoid asking for help when he needs it. The smile Karolina (Virginia Gardner) wears does little to convince others of its authenticity while the mask Nico (Lyrica Okano) shows is more literal with her makeup. Gert (Ariela Barer) wants to take down the patriarchy, but her own insecurities are close to the surface. There’s a lot of baggage between them all, and even Molly (Allegra Acosta), the youngest of the six, has a mask that’s about ready to come off. (And like many young women, her discomfort and pain is initially believed to be something else entirely, but we doubt anyone would’ve landed on what it really was, even in the MCU.)

They’re fighting their own demons long before super strength, Fistigons, a magic staff, and alien-like abilities come into the picture—although some of those things are hinted at in the pilot. Josh Schwartz (The OC) and Stephanie Savage (Gossip Girl) have done a lot to lay the ground for the high school drama that takes center stage; the Marvel aspects complement the more human stories it tells. (The music is pretty spot-on, too.) And so far the Runaways work best when they finally come together, for one reason or another.

One potential hindrance is the size of the cast. Between the parents and the teens, we’ve got 16 characters to keep track of, which could be hard at first for viewers not familiar with the comics. But as Marvel TV’s Jeph Loeb revealed at the Runaways panel Friday night, the second episode will focus more on the parents, which can give the show a chance to flesh them out far more than the comics did.

Just one episode in, fans of the original Runaways will recognize plenty of homages or references to its comic book origins, and they’ll definitely recognize the beloved story within the show. And even if you’re familiar with the story, the ending will have you holding your breath with a desire to hit play.

The first three episodes of Marvel’s Runaways debut on Nov. 21. After that, the following episodes will be released weekly.