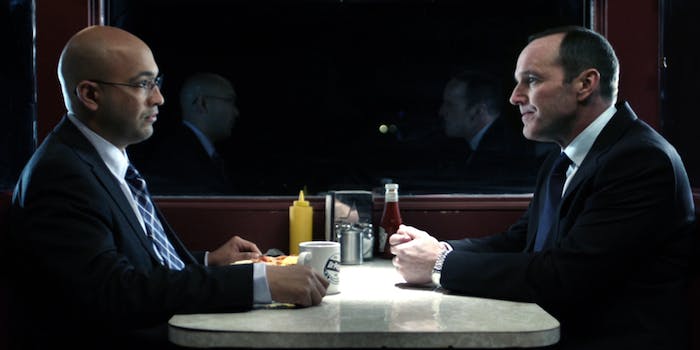 Is Agent Jasper Sitwell’s lack of popularity is a combination of bad luck and unappealing characterisation, or influenced by racial bias?

A character from a beloved movie series gets killed off, and their fans rally to have them brought back from the dead. We’ve all heard this one before, but in the case of Agent Jasper Sitwell from Marvel’s Avengers movies, the situation is a little different.

When Sitwell was killed off in Captain America: The Winter Soldier, it was clear that his character arc had many similarities to that of Agent Coulson, who was resurrected following the hugely popular #CoulsonLives social media campaign. Both characters had minor roles in movies like Thor and Iron Man. Both were introduced to show the human, pragmatic middle-management side of Nick Fury’s morally ambiguous S.H.I.E.L.D. agency. Both appeared in straight-to-DVD short films and the Agents of S.H.I.E.L.D. TV series, although admittedly Coulson was given a more significant role. But a week and a half after Sitwell’s death in Winter Soldier, his equivalent fan campaign, #IBelieveInSitwell, is not exactly taking off.

So, why does everyone love Coulson so much more than Sitwell? What makes them so different?

Well, the most obvious difference is that while they both had very similar introductions to the Marvel Cinematic Universe (MCU), their characters wound up going in opposite directions. Joss Whedon bumped up Coulson’s tertiary role to that of a lovable everyman hero in The Avengers, which kicked off his fan campaign and led to his starring role in Agents of S.H.I.E.L.D. Sitwell, on the other hand, died in very different circumstances: In Captain America: The Winter Soldier, he was revealed to be a sleeper agent for the evil HYDRA organization. He’d been a bad guy all along.

But as we already know, being evil has nothing to do with a character’s popularity. Just look at Loki, who tried to commit genocide in Thor and attacked New York in The Avengers, but is still widely beloved throughout Marvel fandom. If being a mass-murdering alien overlord isn’t enough to put people off, then Sitwell’s apparent HYDRA defection can presumably be humanized as well. 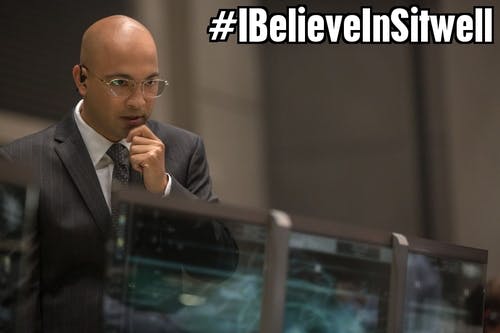 What other reasons could there be for Coulson’s huge lead over Sitwell? Clark Gregg, the actor who plays Coulson, is probably more well-known. He’s a minor geek culture icon and now has about a quarter of a million Twitter followers, so that might have something to do with it.

Oh, and Coulson is white, while Sitwell is Latino.

To be precise, he’s the only Latino character in the entire MCU. Or he was until he was thrown out of a car window in Winter Soldier, never to be seen again. Right now, the actor who plays Sitwell is pushing the #IBelieveInSitwell hashtag, alluding to the possibility that like Coulson, he might wind up being resurrected in “Tahiti.”

This Movie is now huge!! I need a vacation. I think I may go to Tahiti. A good friend told its a magical place. #ibelieveinsitwell

It once again surfaces a popular discussion about race and gender representation in superhero comics fandom.

Marvel movies are often praised for including well-written female characters and casting actors of color to play roles like Nick Fury and Heimdall, but the MCU still looks pretty bad when compared to the far more diverse cast of Marvel comics. Basically, if you only have one character representing an entire demographic, that character winds up representing that entire demographic. Which is probably why so many critics were so quick to dismiss Black Widow as the sole representative of female superheroes: There aren’t any other female superheroes onscreen. Agent Sitwell is a particularly noticeable example because it’s so easy to compare him to Coulson, who is essentially his white counterpart.

“it’s funny* how the white shield agent guy is killed off and there’s twitter campaigns and shit,” wrote Tumblr blogger orionsnacks, commenting on the lacklustre  #IBelieveInSitwell campaign. “Then they turn the [person of color] equivalent shield agent evil when it’s never been indicated that he is anything but a good guy and give him zero motivation for being evil and then kill him off in a really cheap, shitty way and there’s silence from fandom.”

The simplest explanation for Sitwell’s relative unpopularity is that his role in Winter Soldier wasn’t exactly relatable. He’s a traitor who helped lead a manhunt for Captain America and Black Widow, and therefore we shouldn’t be all that surprised that people aren’t beating Marvel’s door down.

However, we have a ready-made Sitwell analog in the form of Agent Ward, an Agents of S.H.I.E.L.D. character who was also recently revealed to be a HYDRA spy. Ward is a handsome, clean-cut action hero, and already has crowds of fans desperately searching for reasons why he might still be a good guy. He’s also white. A week and a half after Winter Soldier came out in the US, the #IBelieveInSitwell campaign has a Facebook page with 43 Likes.

In a franchise as wide-ranging and popular as the MCU, there is no character too minor to have their own fan following. And it’s not as if people ignored Sitwell entirely, because he makes regular appearances in the background of Avengers fanfics, and was actually a recurring character in Marvel comics before his movie debut. (Although in the comics he was white, and not a bad guy.)

It’s impossible to tell whether Sitwell’s lack of popularity is a combination of bad luck and unappealing characterisation, or if it’s influenced by racial bias. We’ll probably never know for sure. What we do know is that if there was more than one Latino character in the entire Marvel movie universe, this conversation would be far less relevant.